Reporting here with a new nut-free raw cheesecake alternative: one based in tigernuts. This whole cake started off from a series of casual discussions on Instagram with a lady whose son couldn't have nuts and seeds and she was curious if I thought tigernuts could work in a raw cheesecake recipe. The truth is the first couple of chats I wasn't so eager -- my experience with tigernuts up until then had not been stellar (more on this later), but one day I was on my way to a shop I knew carried them and another one of those convos ensued and I thought "hey, why not?!" and decided to give it a try despite my reservations. And ended up with this amazing raw tigernut cheesecake recipe that I'm so excited to share here. 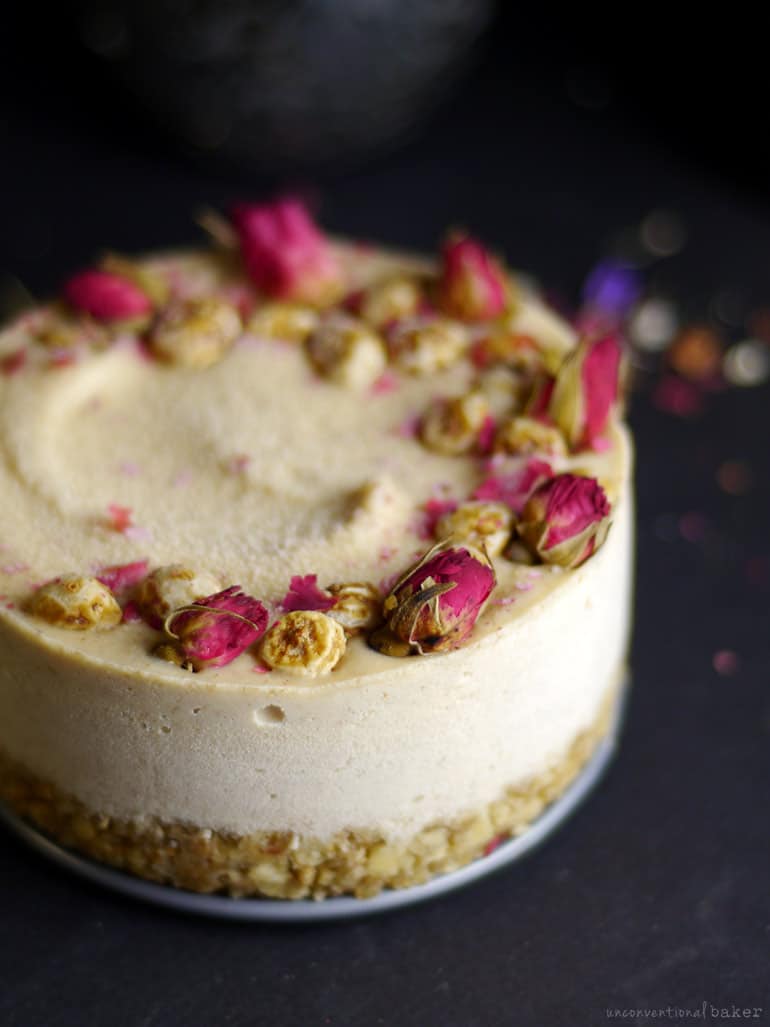 Sometimes simple conversations with others translate into the most wonderful ideas, and I'm thankful that this cake and these magical non-nuts worked out so well, all thanks to blog reader inspiration.

So... what's the deal with tigernuts, you're thinking? 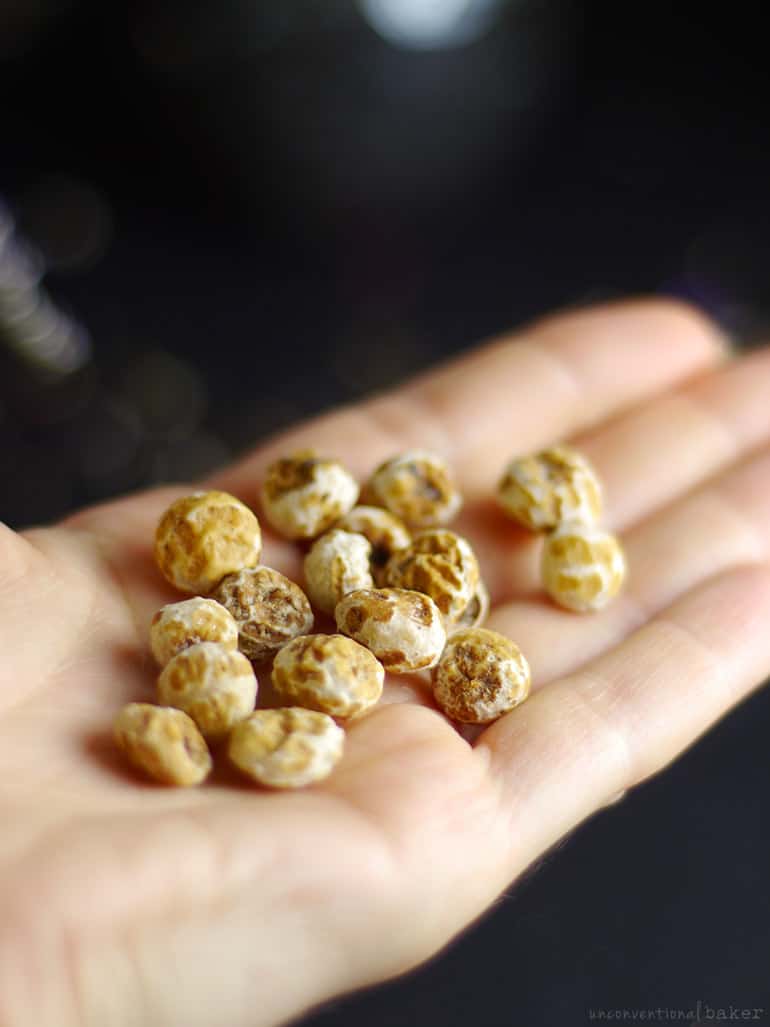 Well, I know for some of you these aren't going to be a new thing. In fact some cultures have been using these little guys traditionally for ages. But since they were relatively new to me at the time I made this cake, I thought I'd fill you in in case you're feeling a little apprehensive to give them a try.

And so, first off, despite the name, they're not a nut at all, but a tuber (grow underground, much like potatoes and yams). The package came with lots of accolades, including the fact they're apparently high in fiber, iron, phosphorus, magnesium (impressive!), have appetite curbing qualities (interesting..), and are naturally sweet (that they are -- love that quality). Whether they came with all that stuff or not, "superfood" or not, I don't personally mind too much -- would have used them either way since that's what I already set out to do with this cake exercise, but thought some of you might like to know that stuff :) 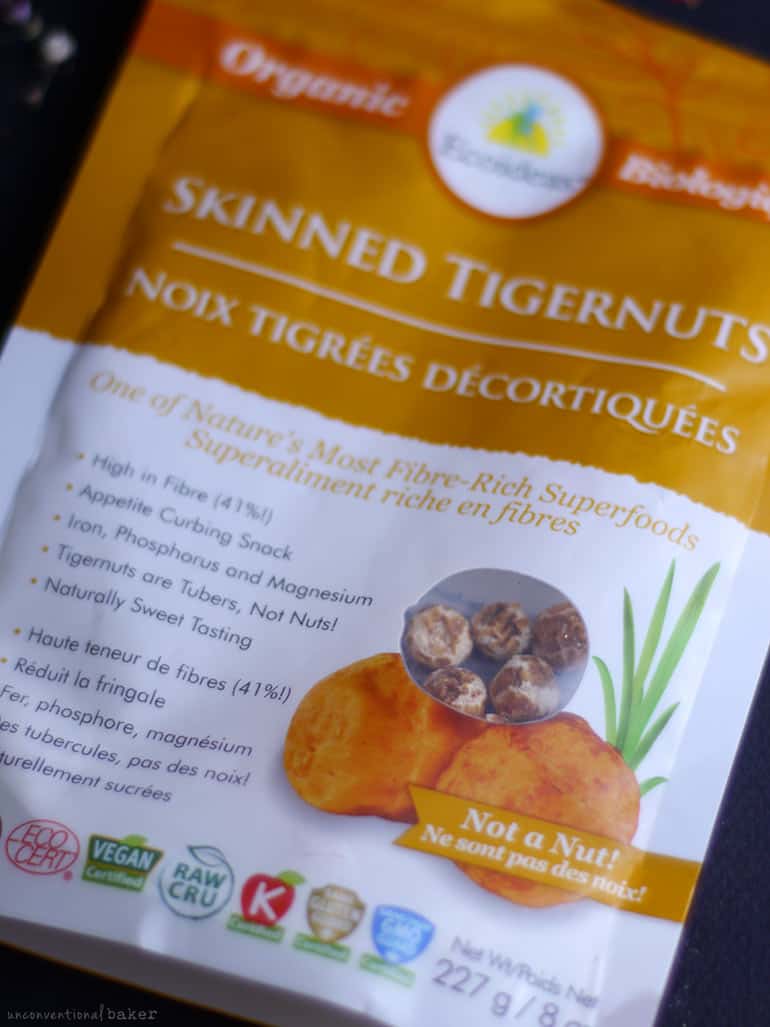 I love that you can use them to make a cake that is truly nut-free. Some of my other nut-free cakes (see the nut-free cake section on the recipes page) are seed-based, since that's the easiest substitute for nuts, yet many people who have severe nut allergies can't have seeds either (due to cross-contamination issues or related allergies). So these little fellas are a good option. I also love that this recipe is raw, unlike, say my cauliflower cakes, or bean-based cakes, etc., so it's a good option to keep in mind. And I just love it because trying out a new ingredient and loving it is a reason to celebrate sometimes -- the little things that make me happy... :) 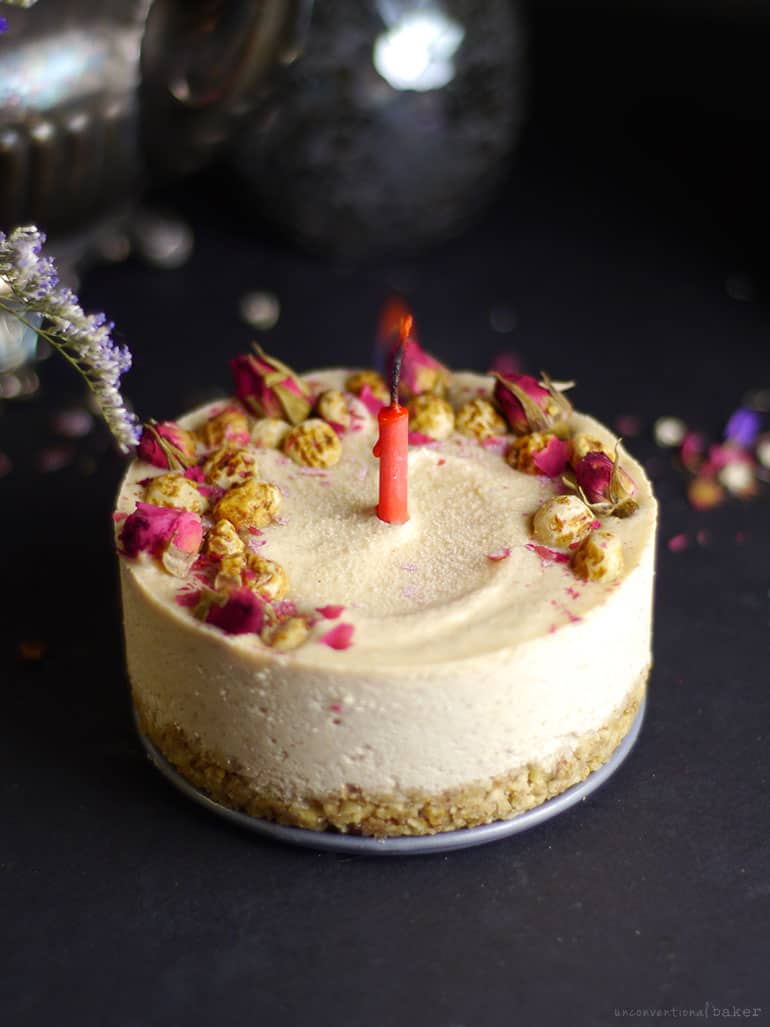 As I mentioned in the beginning though, I wasn't so quick to "celebrate" these little nuggets as my limited experience with tigernuts up until then has been less than likeable... I've been curious about them a while but usually skipped buying because they weren't the cheapest (though not more expensive than many nuts), I worried it's another one of those pricey hyped up superfood trends (which I'm not usually too eager to jump on...), and I was kind of intimidated by the instructions that came on one package I examined at a store once -- they required all this soaking to soften in order to be made palatable, etc. I also worry sometimes about using unusual ingredients because I know they're not available everywhere so some people will be missing out... and so the whole thing just seemed pass-ish.

Then one day I found a place that sold them in bulk. Bought just a few to try and almost broke my teeth -- yep, I could see the need to pre-soak. Those things were like little rocks. And the texture was super chalky and the flavor very foreign. I was glad I didn't splurge on a bigger bag. On another occasion I bought a jar of tigernut butter. I'm quite adventurous with new things like that and when I saw a jar at the shop I paid the high price tag and was eager to give it a try, only to discover it was just bizarre-tasting (well to me, at least. The friend I gave the jar to didn't seem to mind). It wasn't pure tigernut butter, but had other ingredients like oil and vanilla, etc. It just tasted like an oily, chalky, oddly sweet nut butter imitation. No thanks!

So, you can see why I wasn't super excited to give tigernuts another go. But when a reader asks, sometimes I can't help but give things a try anyways. This one worked out beautifully in the end -- and I'm now a tigernut fan for life. But there are a few things I learned along the way that have changed my perception of them. 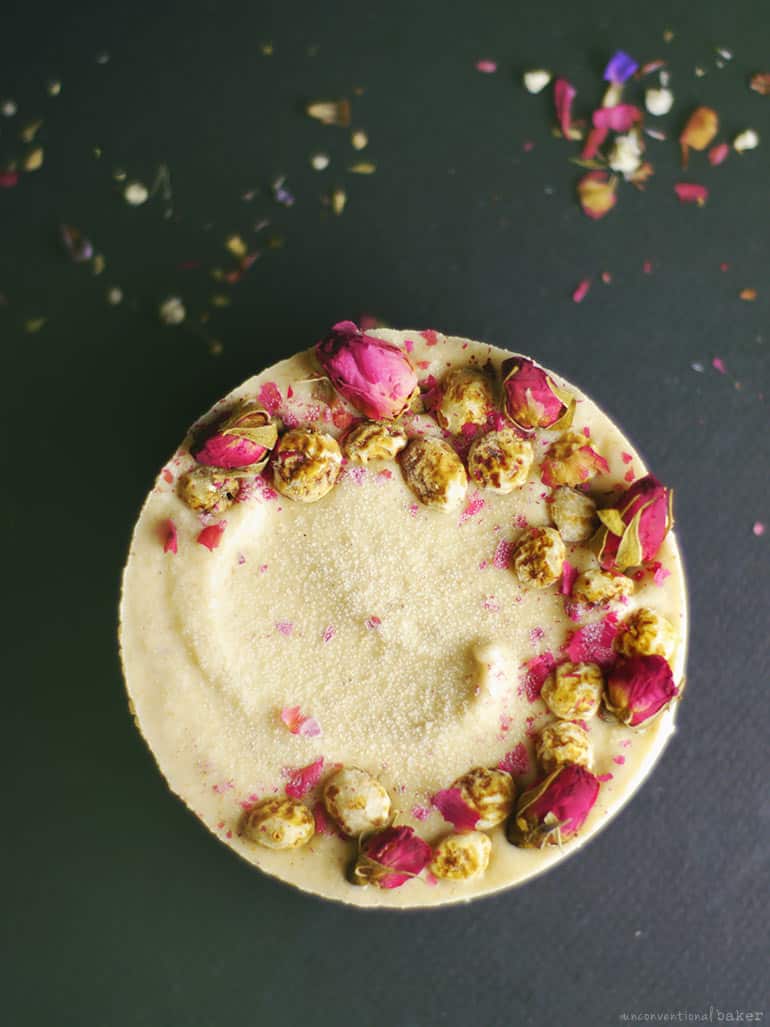 First off, go for skinned or peeled tigernuts. They are much, much softer (unlike those little rock ones I tried before) and easier to work with. You don't have to pre-soak them to enjoy them just as you would regular nuts or seeds. Second, speaking of soaking though, pre-soak them like nuts if you want them to blend more smoothly (for a few hours in room temp water). Third, expect some grittiness which you'll need to balance out with other ingredients (don't worry, this cake is not gritty so long as you have a good power blender -- balancing act accomplished*). Fourth, they don't make a good nut butter on their own (which is why I suspect that jar I bought had all that extra stuff in it). Fifth, try not to eat them all in one go -- they're kind of addictive once you come around to liking them :). Sixth, though the price tag seems high, they're no more expensive than many other kinds of nuts (at least over here -- so don't be afraid to splurge a little, especially when making a celebration cake or a treat). Seventh, try them out in this lemony tigernutty cake and you'll get the hang of how to work with them real fast. Bonus, you get cake as a tigernut baking graduation present ;)

*Just a quick note re: getting a non-gritty texture here. A power blender is a must to get things to blend super fine. I made this recipe in my older Vitamix model and the texture came out super smooth. Newer low profile Vitamixes have a much wider pitcher and as a result this recipe doesn't make enough substance for it to blend into a super smooth texture in such a big blender -- so if you're using one of those, I recommend quadrupling the recipe.

And if you're looking for more delicious things to make with tigernuts, try one of these recipes: 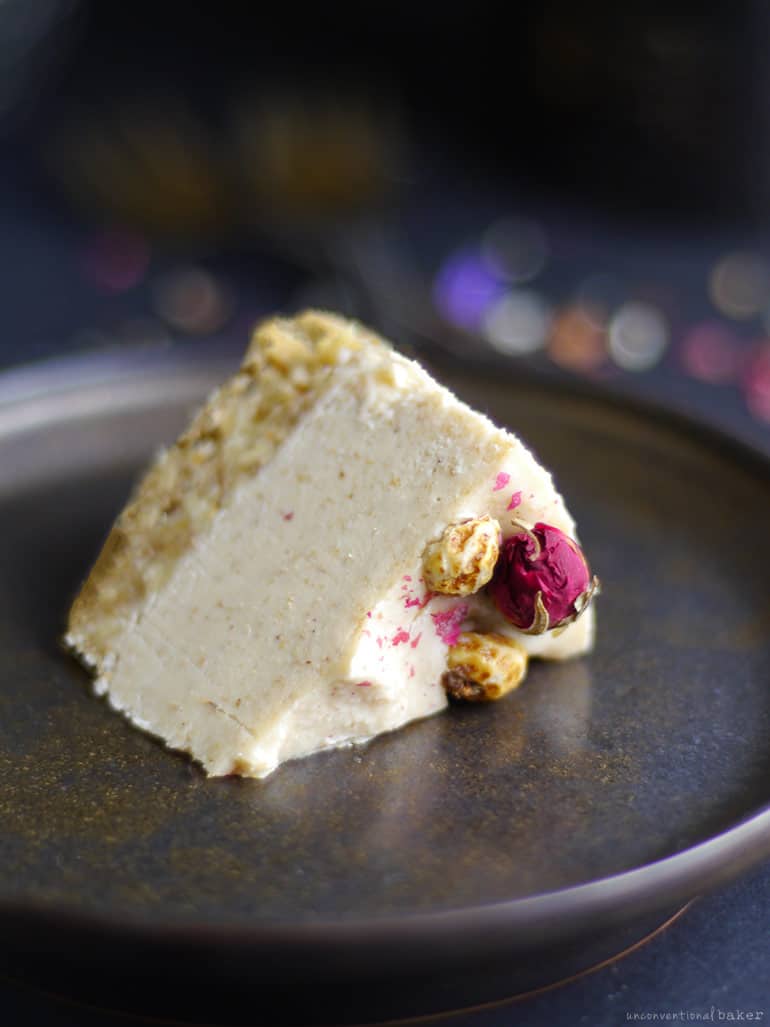 P.S. As per usual lately, this cake makes a tiny 4" cake using this pan. To make it a 5" cake, multiply the recipe by 1.5. To make it 6" triple or quadruple the recipe (depending on how tall you want your cake). Or use a lined small container of a similar size if you don't feel like getting a new pan.... 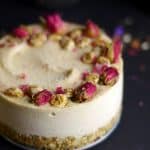