Deliciously sweet, moist, and somehow "fruity" and "caramely" all at once, these carob sweet potato brownies are full of interesting ingredients. Well, two of these I already gave away in the title: sweet potatoes (a nice easy veggie to sneak into a dessert), and the other is carob.

A chocolateless brownie might sound a little odd, but there's a very good reason I went with carob here and I'll elaborate on it more below. For now suffice it to say, it's a lovely change-up from good ol' chocolate, and it's been waaaay too long since a carob dessert happened here, so it was about time and I'm glad I had an excuse to put it to use again. 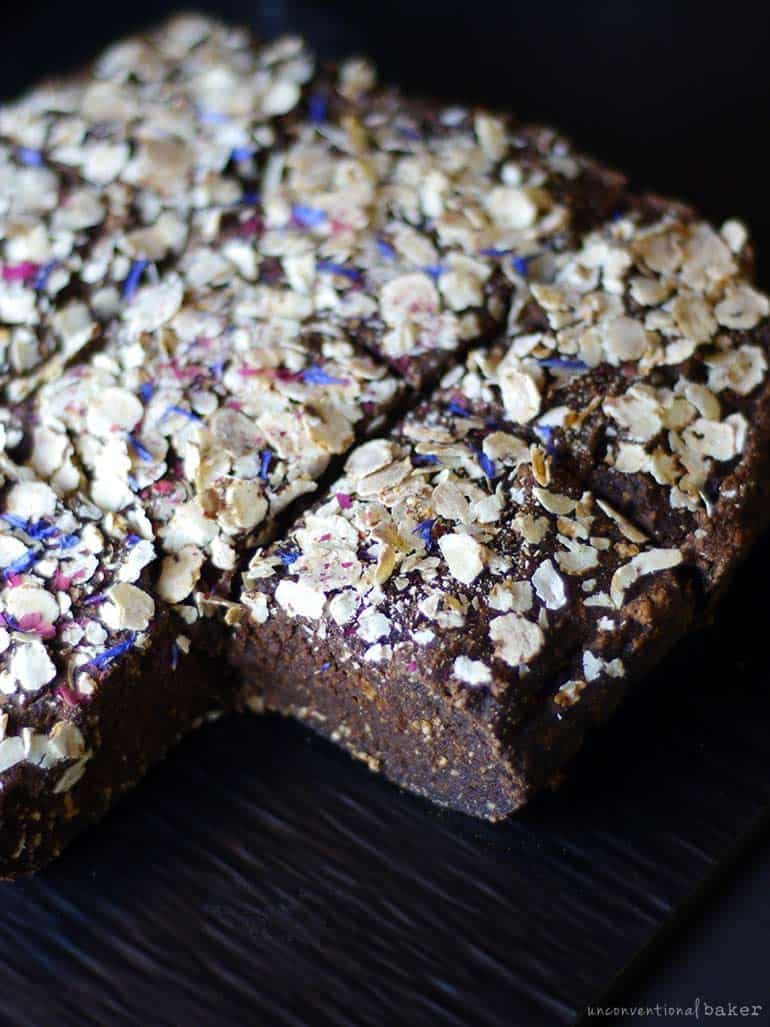 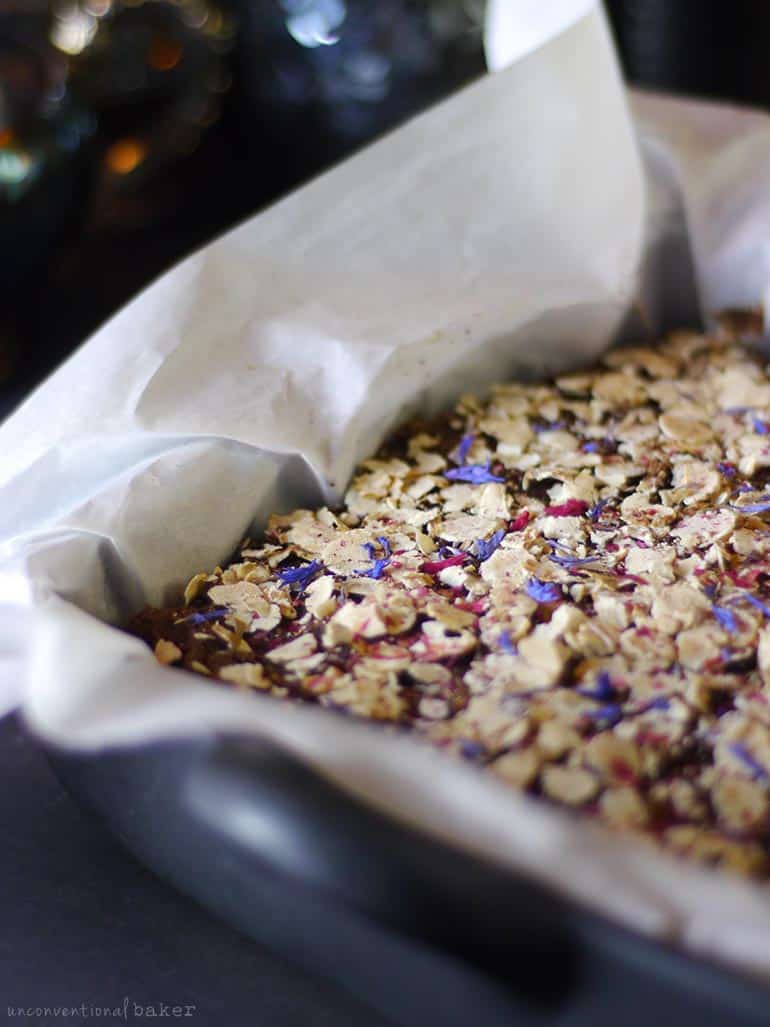 Last week I received a lovely email from "Grandma Judy" asking to be pointed to a recipe or just if I had any recommendations for a treat for her grandson's birthday. His current food range is very limited due to food sensitivities when it comes to desserts... Ideally a brownie of sorts was wanted.

I've had the pleasure to assist with ideas for some challenging food sensitivity cases in the past, and these projects have been extremely enjoyable and rewarding. Reminiscing on some of them now, there was for instance this Crazy Fruity Carob Pudding Cake for the cutest 1yo's birthday party with some limited food choices. Or this Caramel Coconut Cake, consisting of a single ingredient only (coconut!) for another little one with a condition that prevented him from having a birthday cake otherwise. Or this special food-sensitivity friendly Fig Hazelnut Caramel Cake wedding cake... 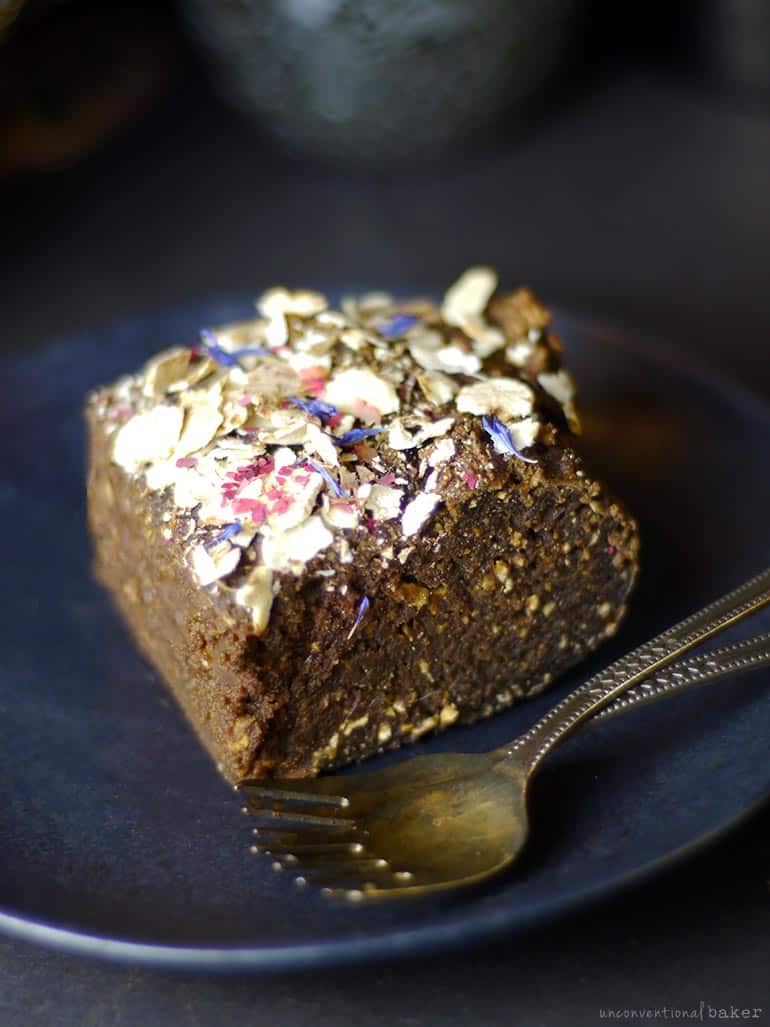 As I began thinking of existing recipes that might work for this situation, my mind kept circling back to trying something new. As I haven't had the opportunity to visit special shops for all the ingredients here I just had to work with what I had access too. Right off the bat I decided they'll have to be sweet potato brownies, because well, veggies snuck into a treat are always fun. Plus it would be great for texture, binding, etc. in a recipe like this. For the flour I used a mix of cassava flour and tigernut slices. And maple syrup as a sweetener. No oils, no nuts or seeds, gluten, dairy, eggs, etc., but a lot of yum! :) -- which I hope will make these accessible for others with similar food restrictions. 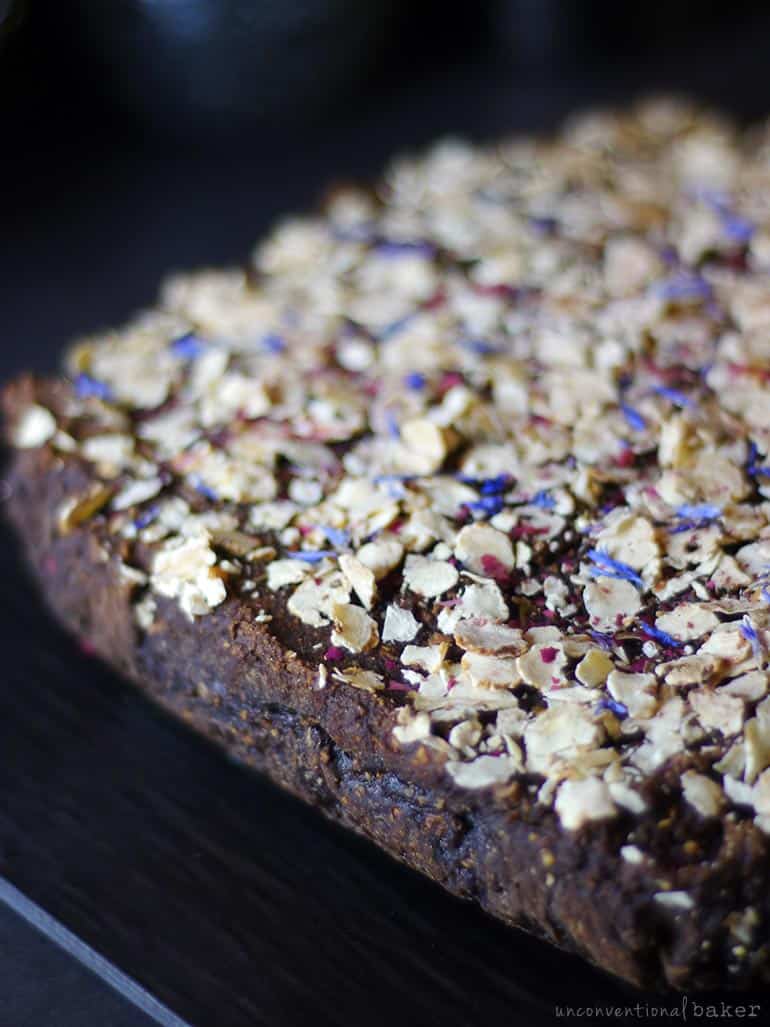 Cassava flour is something that's been pretty challenging for me to get into until now. I've been asked for recipes using it for years now, but it's just not an ingredient that I've seen being commonly available here and overall it's pretty pricey, so I've been skipping it... but I recently saw some in a shop and decided to finally grab a bag to play around with sometime. And so I was glad to have Grandma Judy give me an excuse to put it to good use here :)

If you're not familiar with cassava flour, it's a grain-free flour made from yuca root, which is what tapioca starch is made of, though cassava flour differs in that it's not just the isolated starch but the whole root. Look out for it in the gluten-free baking section of your grocery store, or at health food shops. Or online on Amazon or Well.ca, etc. 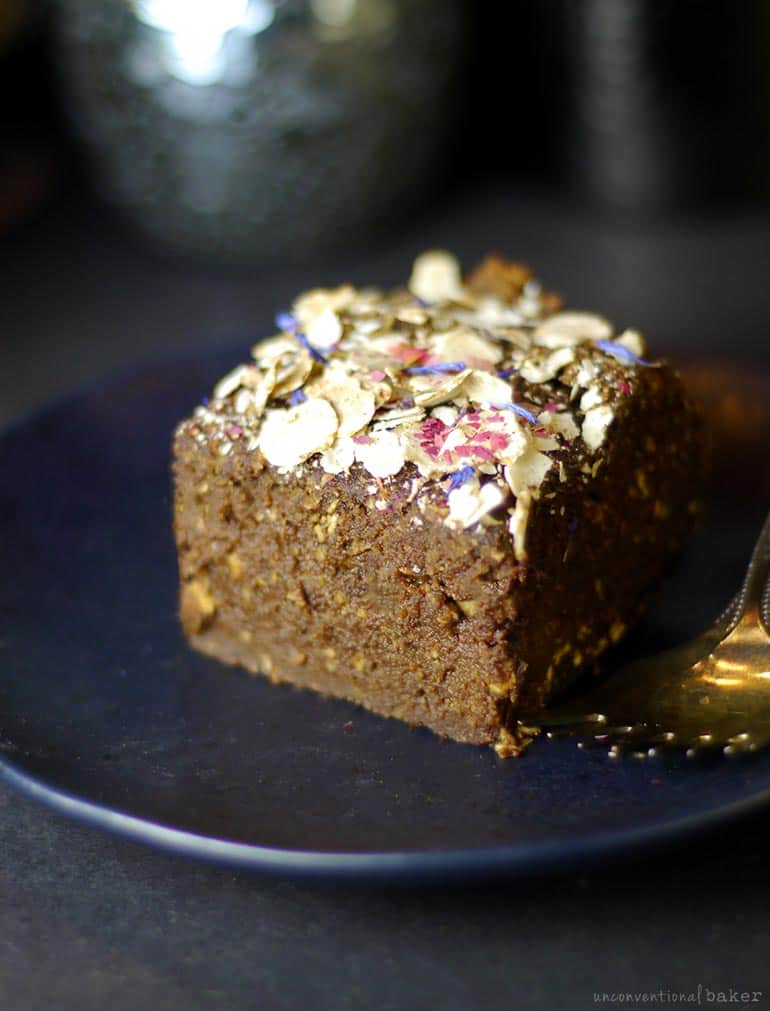 The other thing is that although I also planned to use tigernut flour in these, the grocery store only had tigernut slices for sale. So I used those, which gave these a firmer texture that I liked better anyhow. Plus, the ones sprinkled on top get all nice and toasty after being baked in the oven -- delicious!

And last but not least, if you prefer, you can definitely half the recipe to use less ingredients. So you can do half for example and bake them in a small bread pan, or in muffin cups, and so on. Just keep in mind that they'll bake faster in a smaller batch so keep an eye on them. 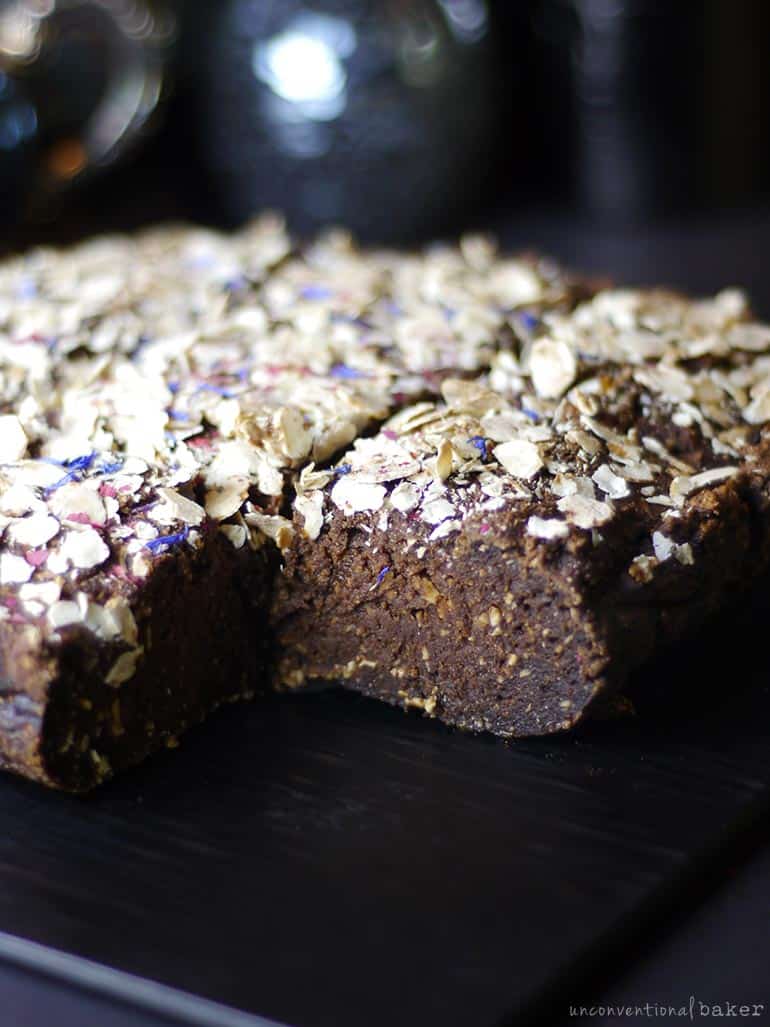 So here you go, a rather unconventional treat today, but hoping it will bring a smile to someone's 2nd birthday out there :) Despite being made from unusual ingredients, these carob sweet potato brownies turned out quite special and I know it's a recipe I'll be coming back to myself (they make a pretty tasty snack, or a quick breakfast too).

P.S. I added a bit of cinnamon and vanilla to these for a bit of extra flavor, but they're not essential. So if they're on the no-go list, feel free to skip. 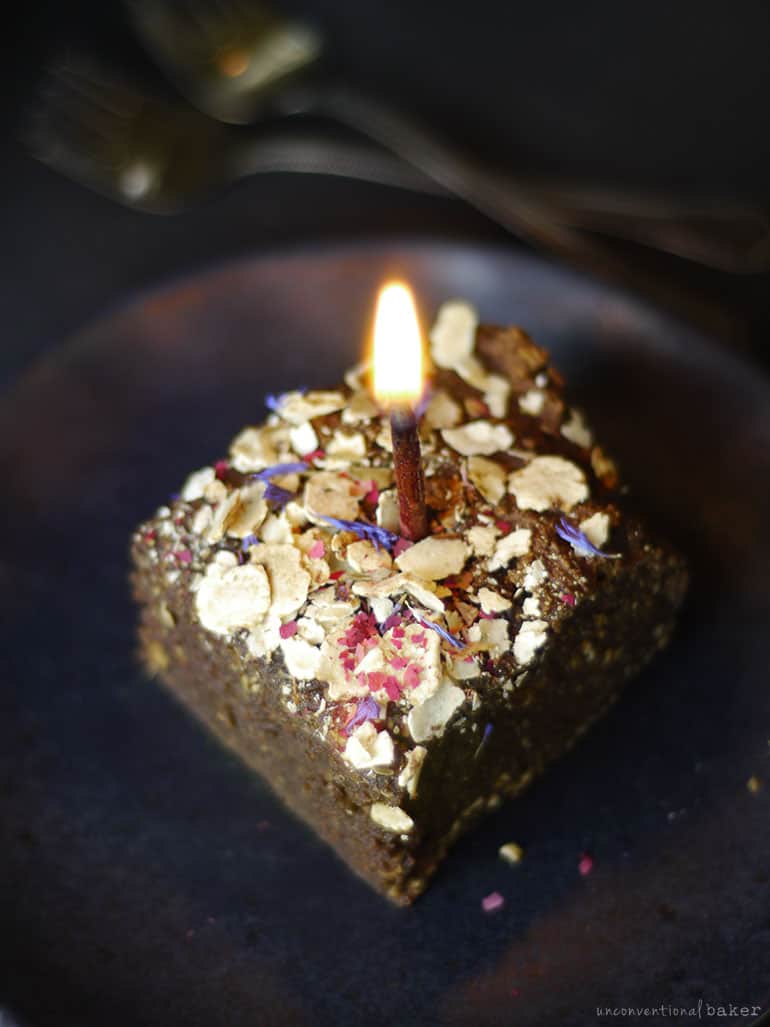 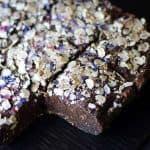 *I used Otto's Cassava flour for these. I've heard that different brands of cassava flour sometimes produce different results, so can't vouch for other brands as I have not tried them yet.

**Note: the sweet potato puree should be firm and not too liquidy (otherwise, you'll need to play around with lowering the amount of water in the recipe to accommodate for the extra moisture). You can just steam some sweet potatoes until completely soft, then mash them up with a fork, or bake them until they are at a mashable consistency. Alternatively, can used canned sweet potato puree. If making your own mashed sweet potatoes, make sure it's slightly chilled or at a cool room temperature before adding to the blender (so as to to avoid the hot potatoes causing the maple syrup to caramelize in the food processor while blending).