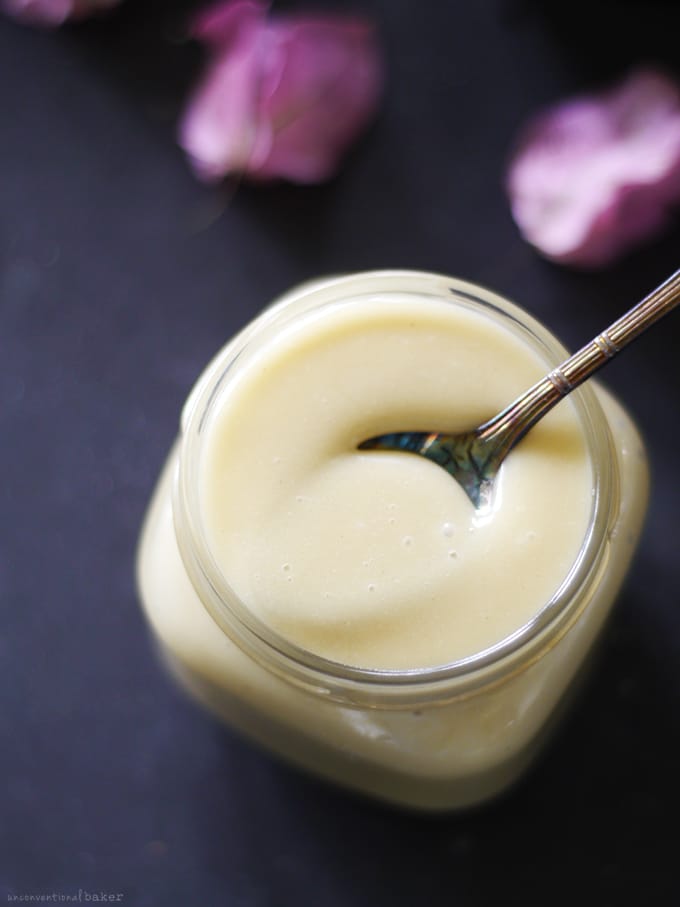 Sometimes, the most basic of pantry staples opens up a world of culinary possibilities, and that's what I bring you today -- a wholesome, sweetened condensed milk substitute and an invitation to get creative in the kitchen. This is hands down the best non-dairy condensed milk alternative I've ever tried, and one that's instant, free from refined sugar, and requires no cooking... And looks, tastes, and acts like the real deal in baking. Interested?

But first I have to share something: did you know that I grew up eating condensed milk as a standalone dessert? That's right, my mom wasn't a baker... I think she may have baked a cake or cookies a whopping total of NEVER. Instead, I was raised on liberal bags of candy and ice cream (thanks, Dad!) and jars of condensed milk (Mom's favorite). And occasionally she would make a giant batch of dulche de leche by cooking the canned stuff, which was quite a special treat... 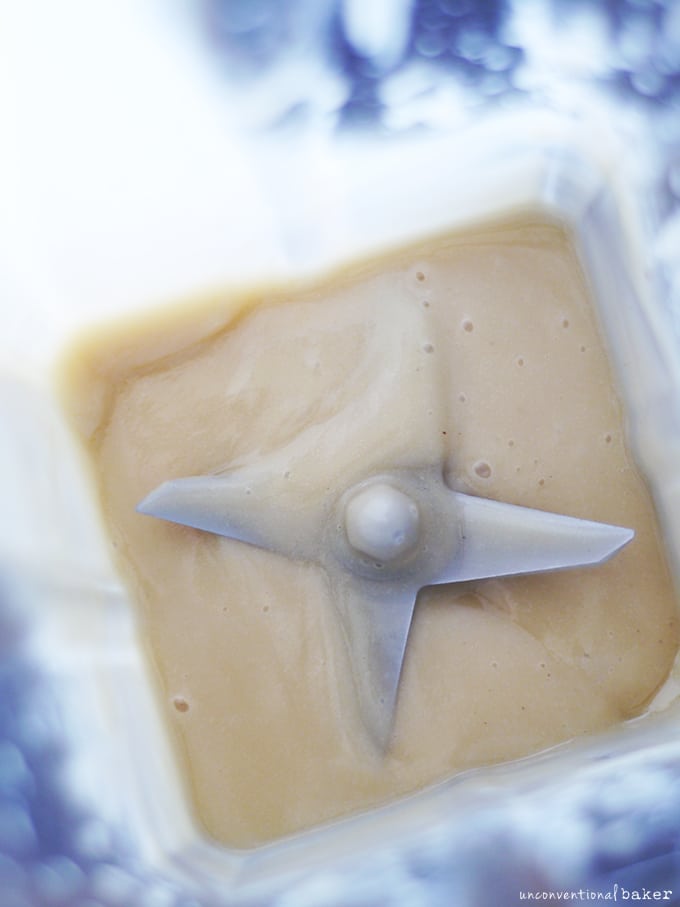 So you see, even though some of you are probably wondering what on earth you're supposed to do with condensed milk, that sweet gooey substance and I go way back. Even though it's odd and perhaps not the healthiest of ingredients to be nostalgic about, I can't help but have a soft spot for that rich, creamy concoction in my memory. Going dairy-free obviously meant no condensed milk and at first I dearly missed it... 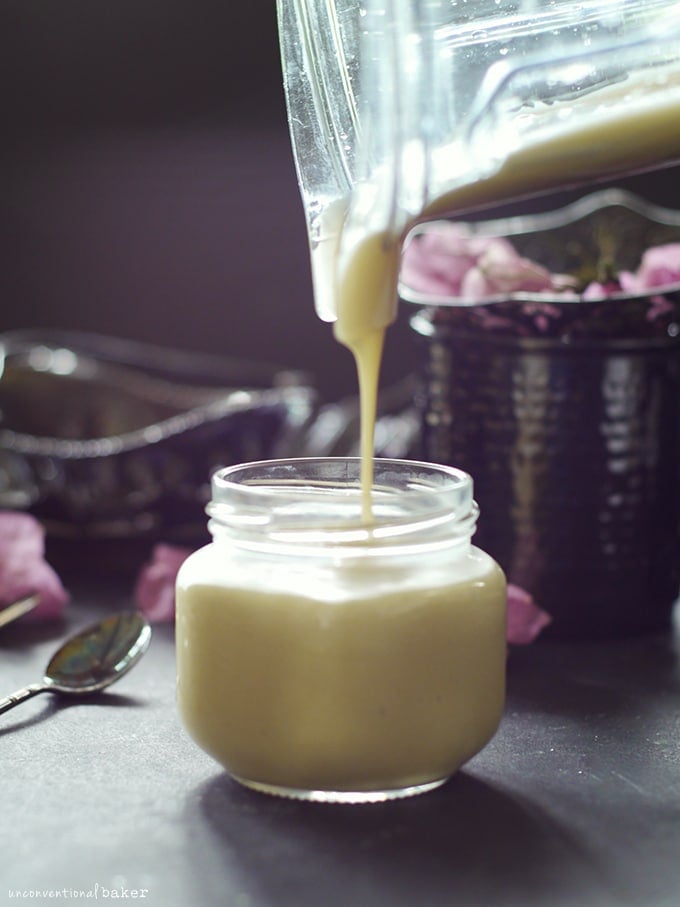 Then I realized that was totally silly -- that's what plant milk is for... of course! It's funny how ingrained ideas are sometimes -- why should anyone feel limited or barred from enjoying something as simple as condensed milk because of being dairy-free -- and yet I fell for it as well. Some years ago once I got that part figured out, I started making my own from scratch, and even have an old recipe for that vegan alternative to condensed milk bumbling around on this blog somewhere. Only, it used a heap of powdered white sugar... and since I later made the switch to no refined sugar, that recipe was out, too. 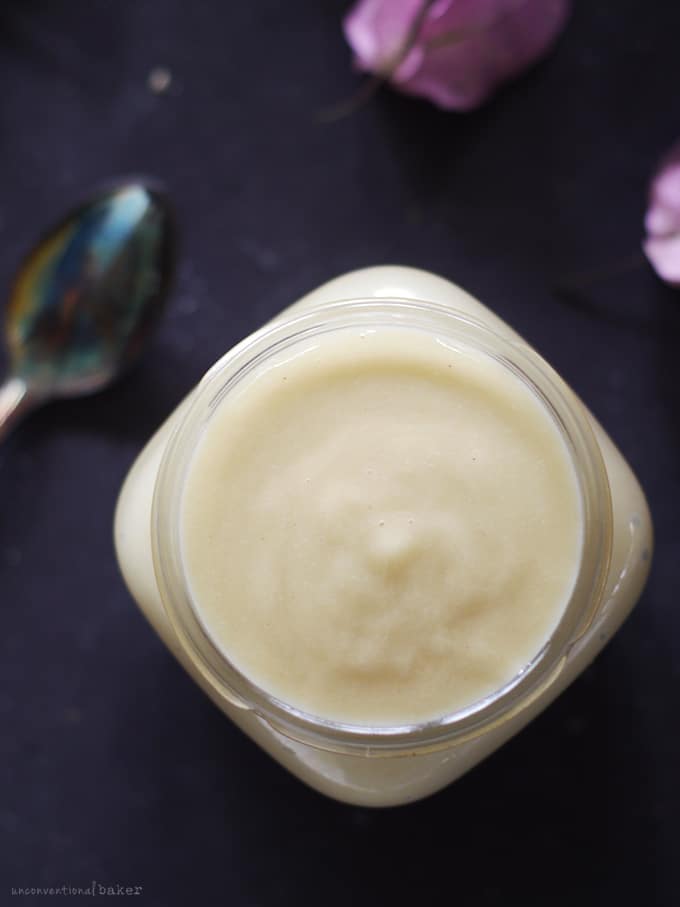 Fast forward a little... I recently needed some condensed milk for a recipe (thanks to a reader request) and decided to make a healthier version. I had no idea how amazing this would turn out. My old recipe doesn't hold a candle to this. This is honestly the ultimate condensed milk substitute -- the only recipe you'll ever need. The one that will get you caught sneaking around in the kitchen with jar and spoon in hand. And there's no cooking or waiting involved. This "condensed milk" is DANGEROUSLY yummy and you'll need some good self-restraint if you're going to be making it... you've been warned! 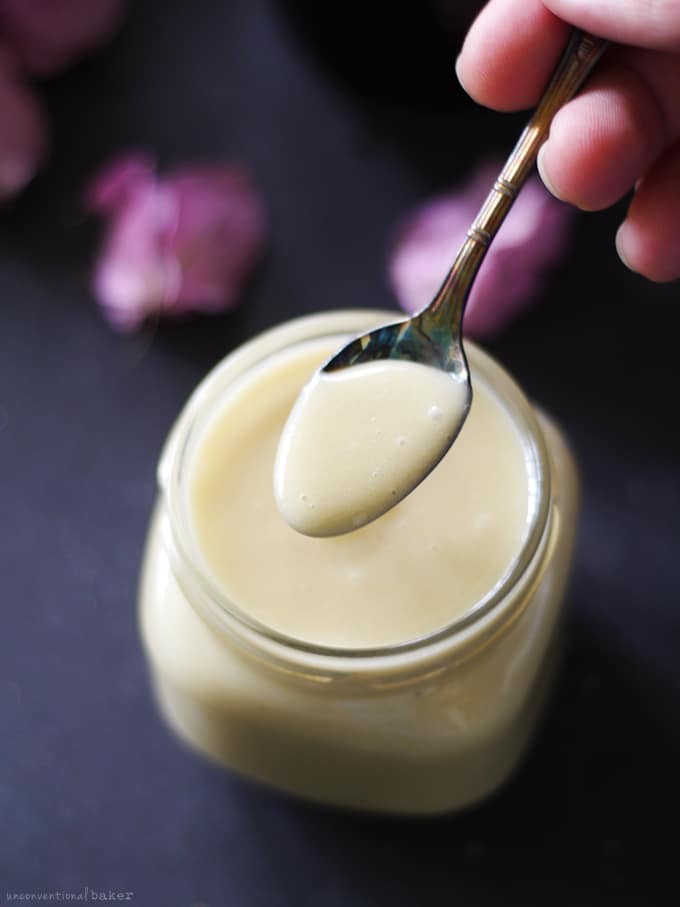 Ok, but seriously, this recipe makes an amazing thick condensed milk alternative, without any weird or unwholesome ingredients. And the best part is that it's instant (the "condensing" happens in the blender... so no need to toil over that stove). I've tested it out in several recipes calling for condensed milk so far with great results.

The only thing to note is that coconut manna (also known as coconut butter -- this is the brand I use) hardens a little when chilled, so if you're going to keep this refrigerated you'll need to rewarm it very slightly to thin it out. Keep it at room temperature if you're planning on using soon (within 1-2 days), or refrigerate and rewarm as needed.

Note: Baking -- this recipe is good to go (as far as I can tell -- worked in everything I've tried so far). Topping on things (think porridge, chia pudding, nice cream) -- good to go. Spread (on toast or crackers) -- obviously good to go. Eat it with a spoon --- yes indeed... As a drink sweetener --  Update: Amazing! (Though if you're blending it with another milk, you'll need to double blend because Milk + Anything with Lemon = Curdling) See this recipe for an amazing Thai iced coffee using this condensed milk.

P.S. If you're looking for a nut-free version, check out the older recipe instead. 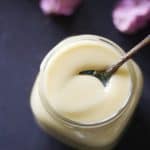