On a whim I decided to make an ice cream float today. Coke floats used to be one of my husband's favorite desserts back in the day. It's been ages since I've had one though, since we don't really drink pop anymore, so I felt like it was time for a more wholesome version. 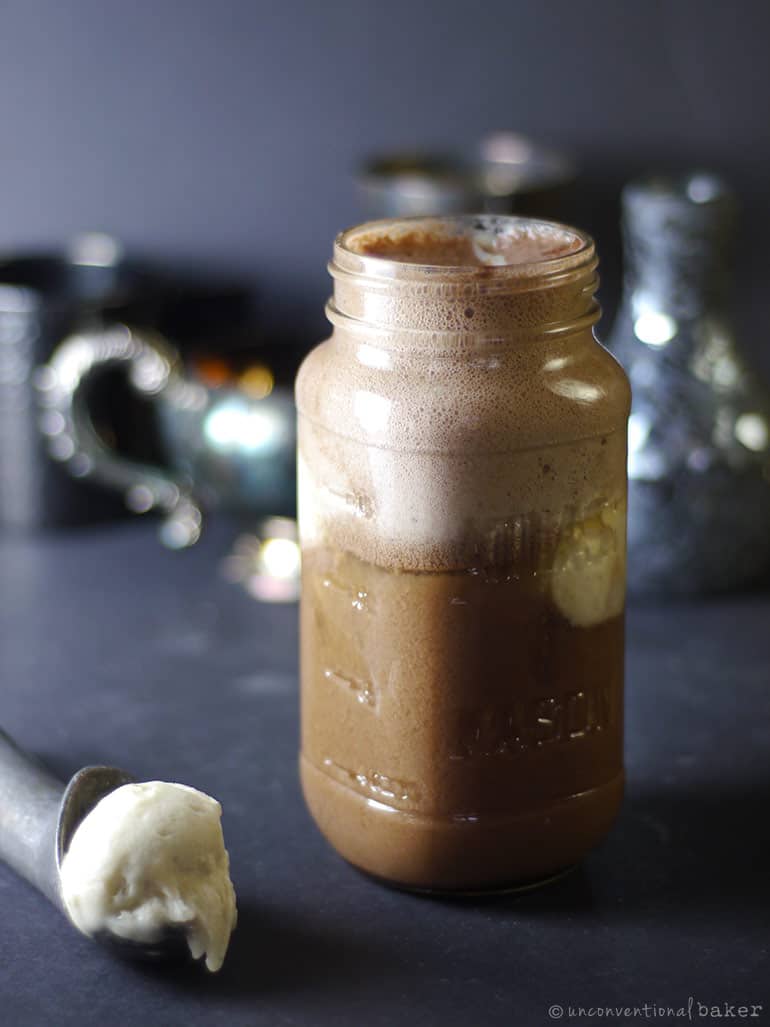 I must admit I had to "wing it" with ingredients I had on hand at home, but the result was a unique and utterly delicious vegan chocolate ice cream float -- this is definitely going to be happening on repeat going forward! :) 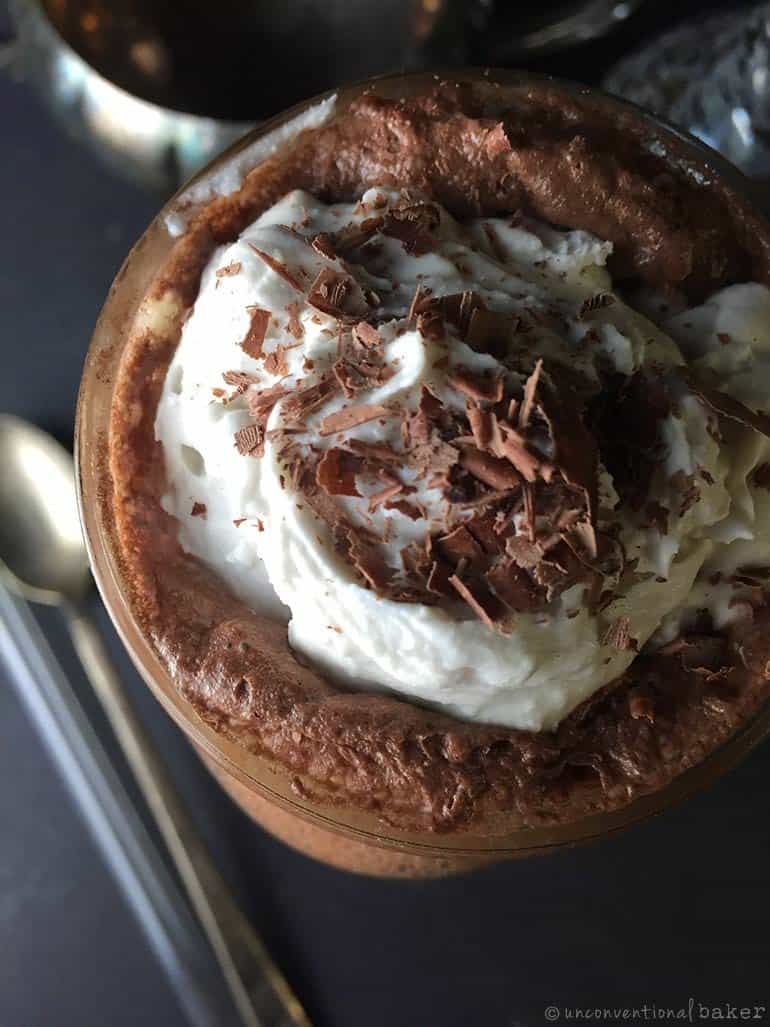 Here's a breakdown of how this ice cream soda went down + a mini guide to ice cream float essentials so you can improvise with ingredients you might have on hand and enjoy some ASAP:

Syrup is an essential part of most soda floats, but the syrups are typically processed. For a chocolate ice cream float, you want a chocolate sweet syrup. And since I didn't feel like cooking up a syrup at this stage just to have a single serve ice cream float, I went for the two simplest ingredients I could think of: cocoa powder and maple syrup (and a pinch of salt for balance), along with the most no-fuss process: stir together with a fork, and voila, chocolate syrup.

For a chocolatey vegan ice cream soda, you'll want to use some kind of a non-dairy milk as a base. I used unsweetened vanilla almond milk for a lighter effect here, but you can use any plant milk of your choice. For a nut-free option, go with coconut, soy, rice, or oat milk. For a richer and creamier flavor, go with full fat coconut milk or some cashew milk.

Seeing that syrup with some of the almond milk in the jar (first two steps of assembling the float) was so mesmerizing I almost would have been happy with that as a treat on its own... but I persisted... ;) 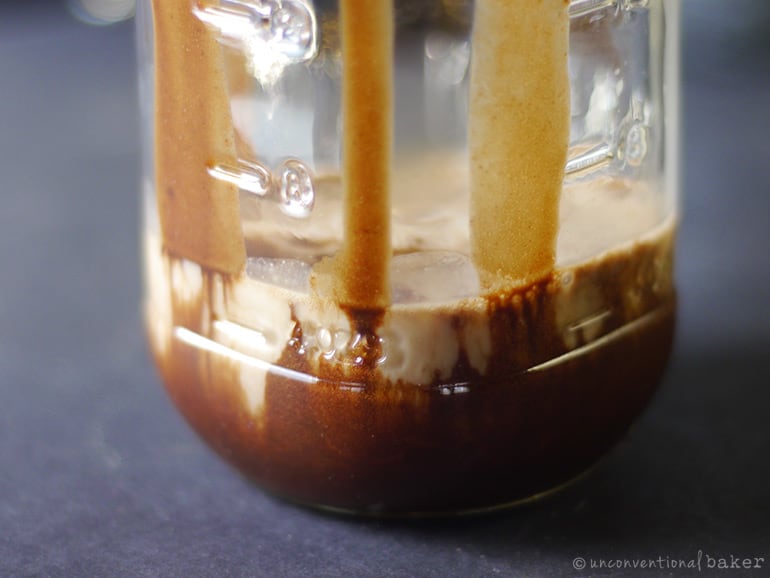 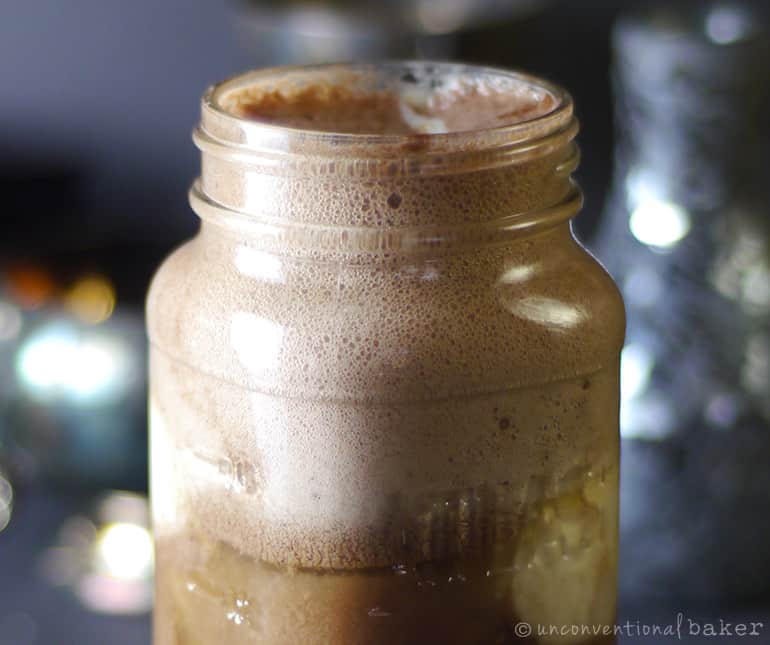 If you're not a banana fan, you can try this with a mango-based "nice cream" instead (I haven't tried, but mango and chocolate go well together, so I suspect it should be a decent fruit-based alternative).

If you're really wanting a classic float though, go with a dairy-free vanilla (or chocolate) ice cream of your choice. Store-bought or homemade. It'll make the float richer, creamier, and sweeter. If you're going for homemade, I can recommend this vanilla and salted caramel ice cream recipe. Or you can make an almond butter or peanut butter ice cream instead (for a total non-traditional, but tasty spin on things), or one of the many other ice cream flavors from the recipes page.

Since I wanted a single serving, lighter float, nice cream made sense to me. If you want it to be a chocolate nice cream, feel free to add a bit of cocoa powder and a little coconut sugar and you're in business. If you want it richer, add a tablespoon of cashew butter or peanut butter. You've got options :) 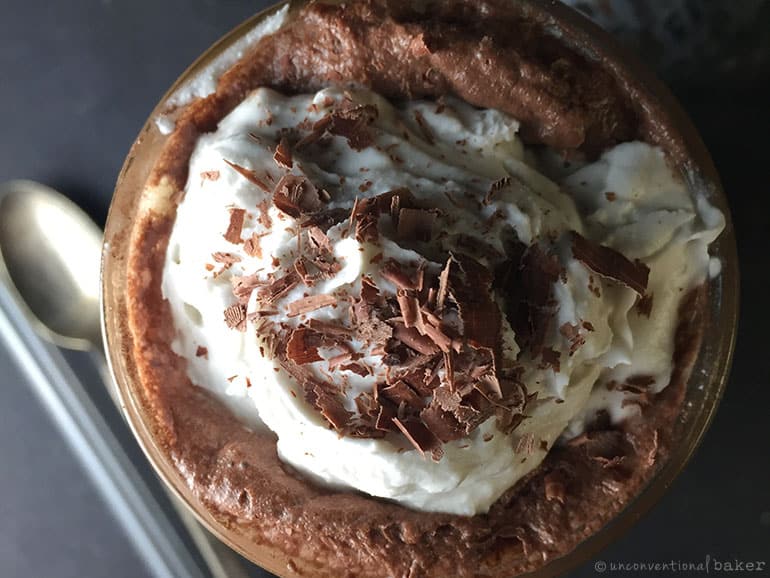 Last but not least, a proper ice cream float will be forever incomplete without a signature dollop of whipped cream. I made some quick and easy coconut whip, but you can also go the store-bought vegan whip route if you prefer. The whip is totally optional (if you're trying to keep things lighter), but it adds a lot of depth and richness to the drink, so the dollop of coconut whip is definitely good to throw in.

For the topping, I just shaved some dark chocolate with a knife to finish things off. And that's pretty much it -- one vegan chocolate ice cream float will be yours to enjoy in no time!

This recipe can be easily doubled or multiplied as needed for more servings. The only thing to keep in mind is that it needs to be served (with a straw) right away, because you obviously don't want it to separate and lose the froth. You can always stir it back together but that foamy top is best enjoyed straight away. 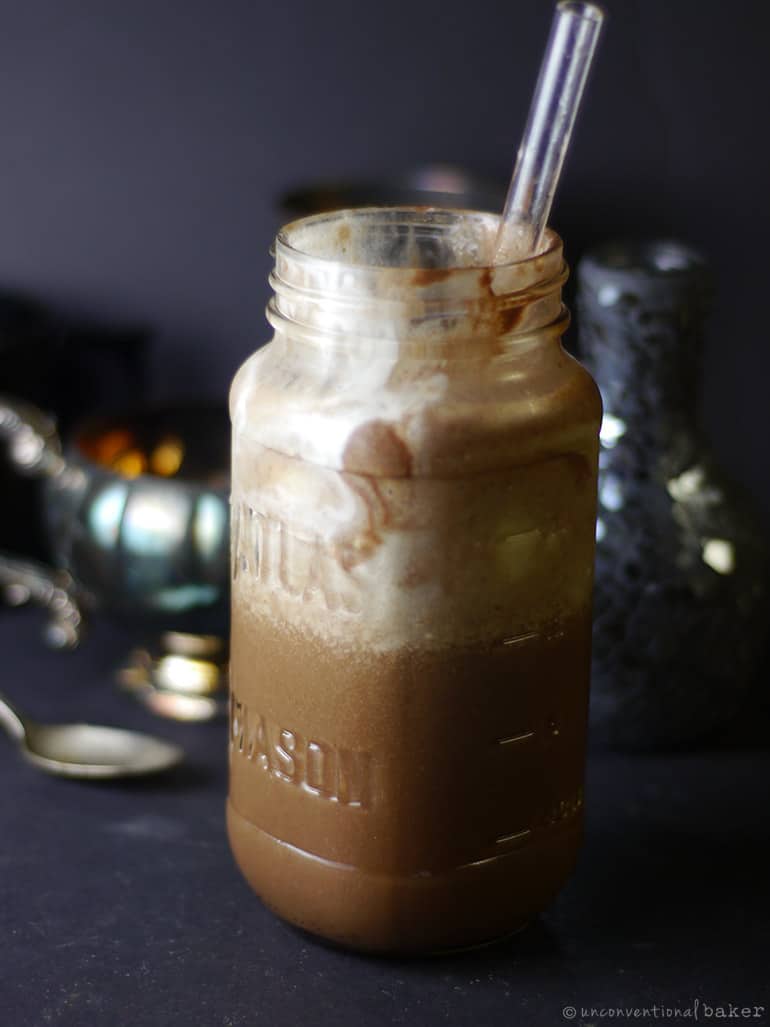 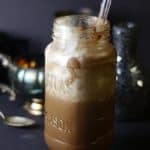 **If you prefer, instead of the banana ice cream (or "nice cream") you can use regular vegan vanilla ice cream here for a more classic effect. You can use your favorite store-bought kind. Or if you prefer to make your own, I recommend this vanilla and salted caramel recipe.

****Note: the middle part of the float will begin to separate if it's not enjoyed straight away. If this happens, simply give the mixture a stir and enjoy.