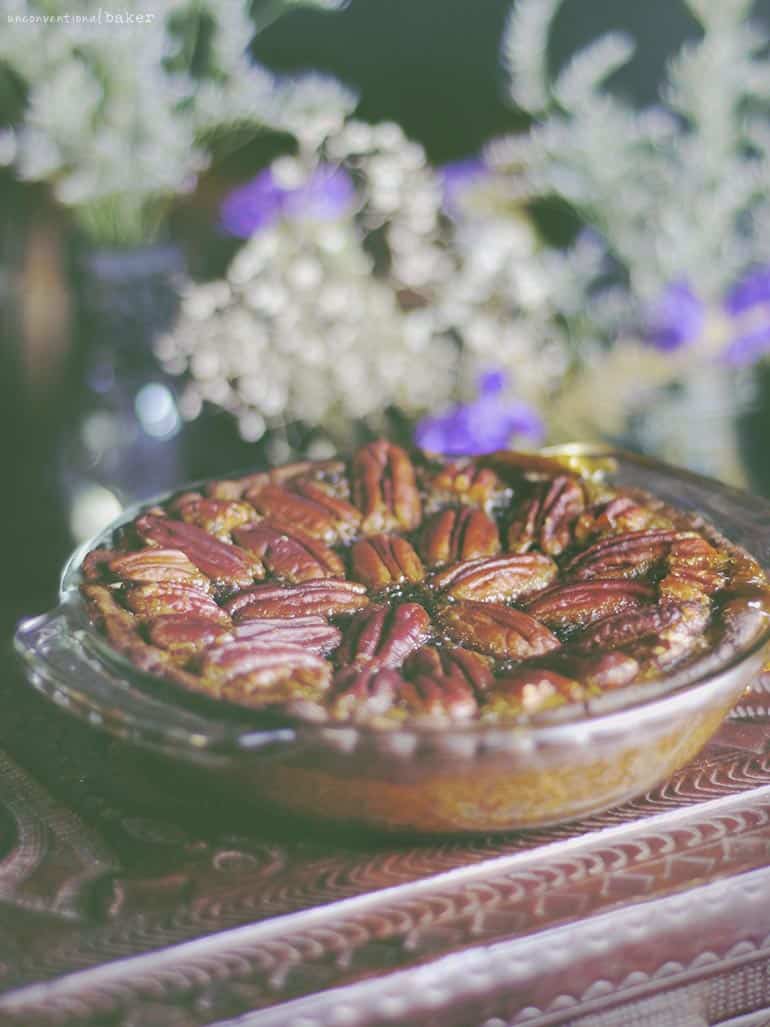 Been going through a bit of a pecan phase over here. As in, pecans day-and-night the last few weeks. I don't know what happened, except maybe the chillier autumn weather turned me into a bit of a pecan fiend! And of course, a good pecan pie could not be passed up as part of the pecan mania... It just wouldn't be fall without one.

This turned out to be the best pecan pie I've ever had. EVER. And I'm not saying this because it's my own recipe :P , but because I had a bit of an unfair advantage with this one.

I made it with the best maple syrup I've ever had, which in turn, made this dessert *epic*. My friend gave me a bottle of it from a local farmer she visits regularly. It sat there on the shelf next to my ordinary maple syrup, and while I've been listening to her rave about how amazing it is, I just smiled and nodded thinking, "Eh, maple is maple -- it's all good. I'll just finish my other bottle first..."

Then I tasted it. O.M.G ? She was right! I've never tasted a maple syrup like that. It was so... smokey and flavorful. I fell in love and used up my jar before I could blink (partly in this pie, but honestly, I think I could have finished it all just "tasting" to make sure I wasn't dreaming).

The moral of the story is... it's nice to support local farmers (when it's possible of course), and you might discover some really magical things like this maple syrup once in a while. That said, I've also made this with regular ol' maple syrup too and it was lovely as well. So don't feel inhibited by a lack of some special variety ;) . Delish either way (as demonstrated by this Canadian Maple Pie using the regular stuff).

And speaking of Canadian Maple Pie, you may notice the recipes are quite similar. I used that as a base for this pecan version. Some peanut-pecan butter went into the crust though, to infuse it with some more "pecan". And of course, the additional pecans on top seal the deal. I was surprised at how easy it was to convert the recipe to be just like one of my favorite classics -- simple pecan pie, without the corn syrup, butter, gluten, sugar, & co. And all with just a few small tweaks! 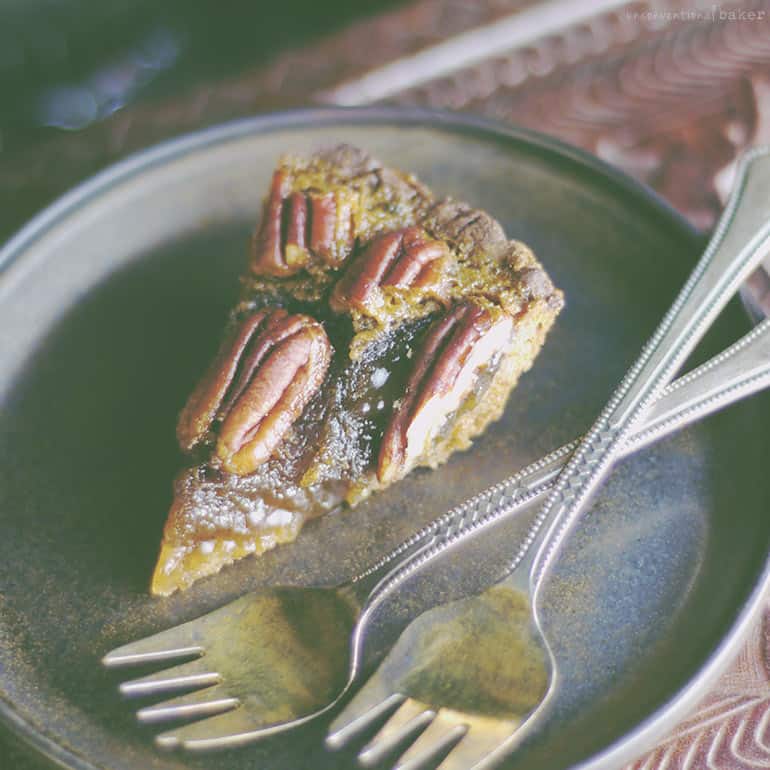 Oh, while we're on the subject of pecans... how do you even pronounce that? ? Sounds strange, but I'm curious. I call them "puh-khaans", while my husband always tries to correct me back to the traditional Canadian way of saying it which sounds like... "peee-cans". Apparently I say it the American way, while the rest of Canada usually goes for the British way... Dunno, I just can't bring myself to say "peeeeecan" somehow haha. Is that weird? 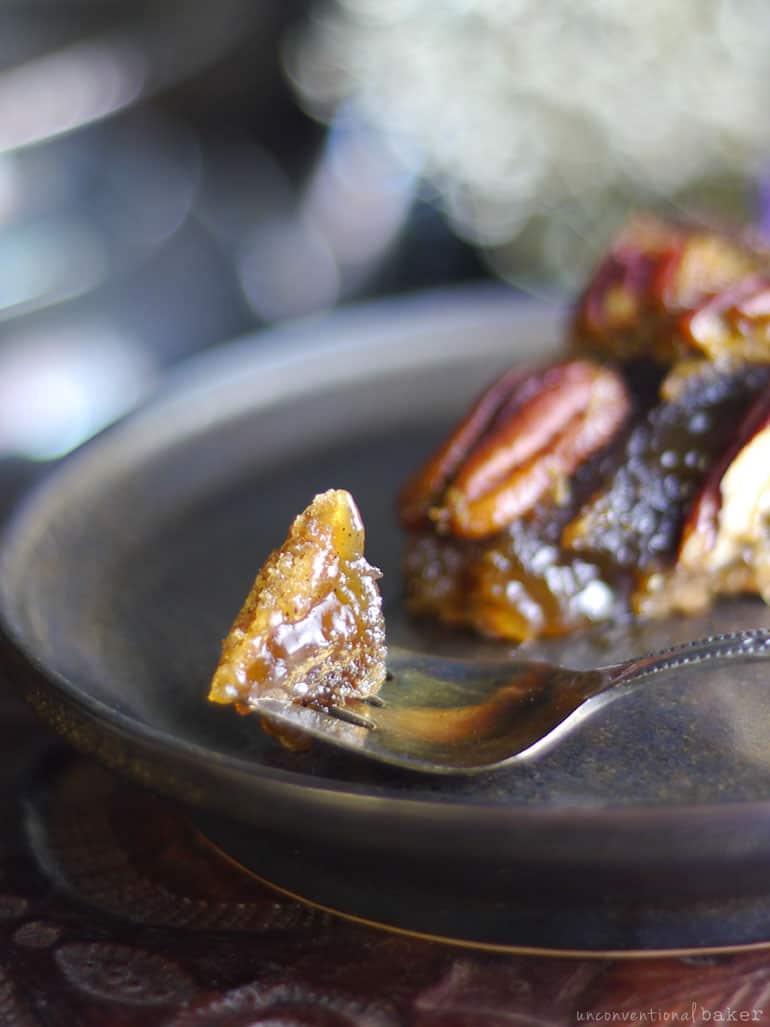 P.S. I made this in my mini 6″ pie plate. If you don’t have a dish that small, use any other oven safe dish of a similar size, or make a few tarts instead, in a muffin pan or ramekins. Otherwise, triple the recipe for a 9″ plate.

P.P.S. For a grain-free crust, you can use the one from this recipe instead.  You'll need about ⅔ of the recipe.

P.P.S. 2. Janel, the amazing lady who made the video for this recipe for me, shared a tip with me about this pie. She had better success with getting the filling to be golden (as pictured) when she scooped off the cream from a chilled can of coconut milk and warmed it up very lightly first. She mentioned that when she used it cold the filling curdled a little which resulted in a less-clear filling. I've never experienced an issue with the filling, but think it's an interesting tip. She also shared that she had better success using the Thai Kitchen brand of coconut milk, which has been my experience as well. 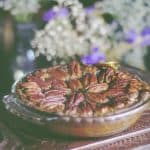 A baked vegan pecan pie without corn syrup -- sweetened only with maple and with a gluten-free crust. Super delicious!

*Note: it's very important to chill the can first ahead of time, ideally overnight, so that the white cream layer separates from the water in the can. You only want to scoop out that firm white layer of cream, and leave all the water behind for other uses (or discard).