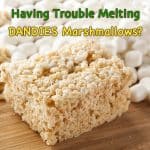 If you’re on this page, chances are you’re having a hard time melting Dandies marshmallows. I know just how frustrating it can be to stand over your pot and watch the clusters of marshmallows staying nearly fully intact… like FOREVER... Especially when other people you're randomly finding on google {Dandies' website included} report success with melting them… What gives, you may ask?

I noticed a lot of you are finding my site by searching for answers on this and instead are finding my rice krispie treats recipe using Dandies and are probably wondering why you're struggling with this. I've certainly experienced my share of those moments when my Dandies seem to just refuse to melt. I learned to work around that, so I figured I'd share a few tips from my experience here in case it may be helpful to some of you out there:

The problem with melting Dandies?

The most logical explanation I have found for this is that some batches of Dandies must just be a little stale. I mean, why else would one batch melt just fine and the next refuse? Another thing about Dandies, as great a vegan marshmallow as they are, is that unlike non-vegan marshmallows I find that they can have a slightly firmer consistency on the outside. It's as though they are coated more thickly and this can interfere with their breaking up when heated. 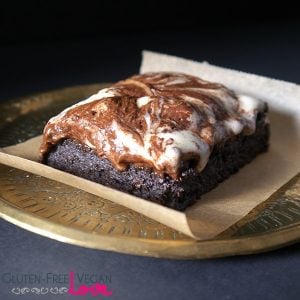 Melting Dandies marshmallows is not impossible, so don't despair. You can melt them on the stovetop in coconut oil and in non-dairy butter {like I did for these rice krispie treats or this pb & marshmallow tart}. I followed the same old directions as one would with regular marshmallows -- heat up the oil, add in marshmallows, and allow them to melt into fluff. HOWEVER, melting vegan marshmallows can require A LOT of elbow grease as compared to their conventional counterpart. That means a lot of stirring and diligently breaking them up with a wooden spoon. And I mean A LOT. Keep at it until they break up into fluff. It will happen!

One trick I found especially useful and a huge time saver is cutting the Dandies in half using kitchen shears. Chopping them into pieces before throwing them into the oil helps them break up and melt faster and the thicker coating I mentioned earlier becomes less of a challenge.

Melting Dandies in the Microwave:

Microwaving them works too. I don't use this method as I'm not a microwave fan, but I know it works. If you choose to use this method, just put them in a microwave safe bowl with tall edges {they expand and rise before they melt, so don't fill to the top or you'll have a gooey mess to clean up!}, and heat on short bursts {like 30 second intervals} until they are melted. Give the melting marshamllows an occasional stir in between bursts.

Melting Dandies in a Double Boiler:

My suggestion is to keep away from melting Dandies in a double boiler -- though it works for regular marshmallows, I found it's not so great for vegan ones. Just put them in a pot with a bit of oil instead and follow the instructions above and you should be good to go.

Lastly, you may also want to consider exploring other varieties of marshmallows depending on the recipe you're going for. I love Dandies and use them the most, but figured you might want to have a look at some other recommendations as well in case they are better suited to your needs. Sometimes going for ready-made vegan marshmallow fluff (like Ricemellow Creme) from the get-go can solve a lot of these "melting" issues. Here's a quick guide I put together of vegan marshmallow brands I like to use in my baking: Which Vegan Marshmallows Should Be in Your Cupboard?

Did I miss anything here? If you've got any other tips, I'd love to hear from you too!

P.S. Be sure to check these vegan marshmallow recipes out while you're here: