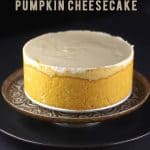 So about this gluten-free, vegan, and paleo pumpkin cheesecake...  I'll only say it was cheesecake-y, pumpkin-y, autumn-y, and absolutely gorgeous and I'll let the photos tell you the rest ;) 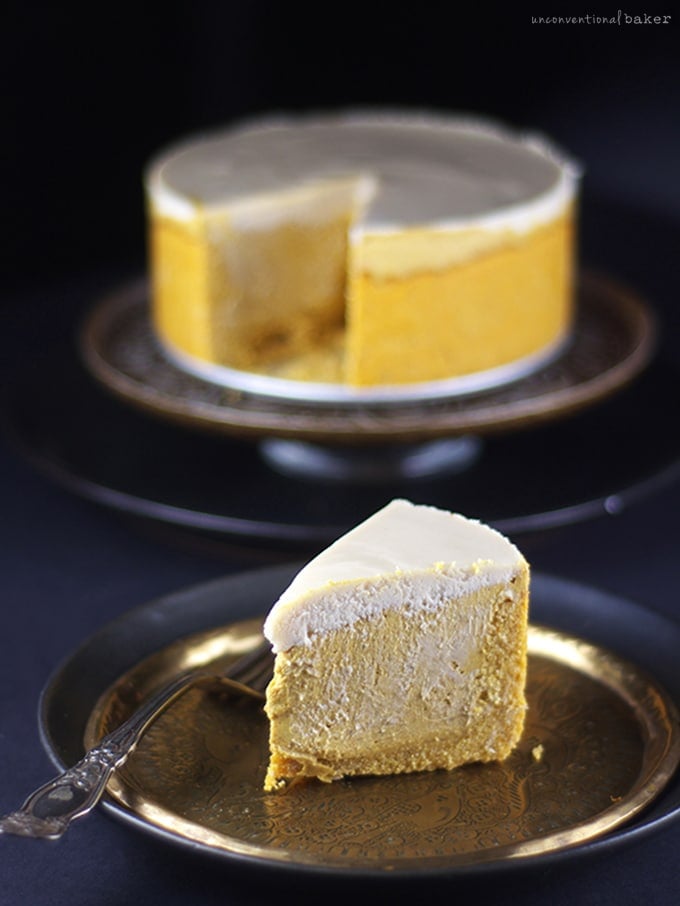 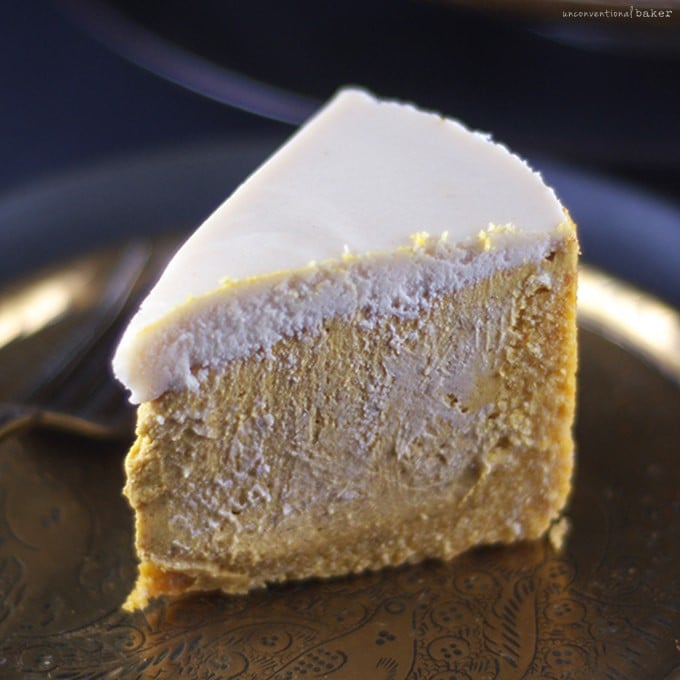 I'll also mention that it's a cashew "cheesecake," so there's no actual dairy (i.e. cheese) in it, but I assure you it tastes every bit as good as a real cheesecake. Just thought I'd mention it since I always get a "where's the cheese?" question on these raw-style cakes :)

So it's no secret I love pumpkin. And it's also no secret I absolutely love this cake. This is my ultimate favorite pumpkin dessert to date. So naturally I've been making plenty of it... I recently tried a new variation that I really loved for multiple reasons. 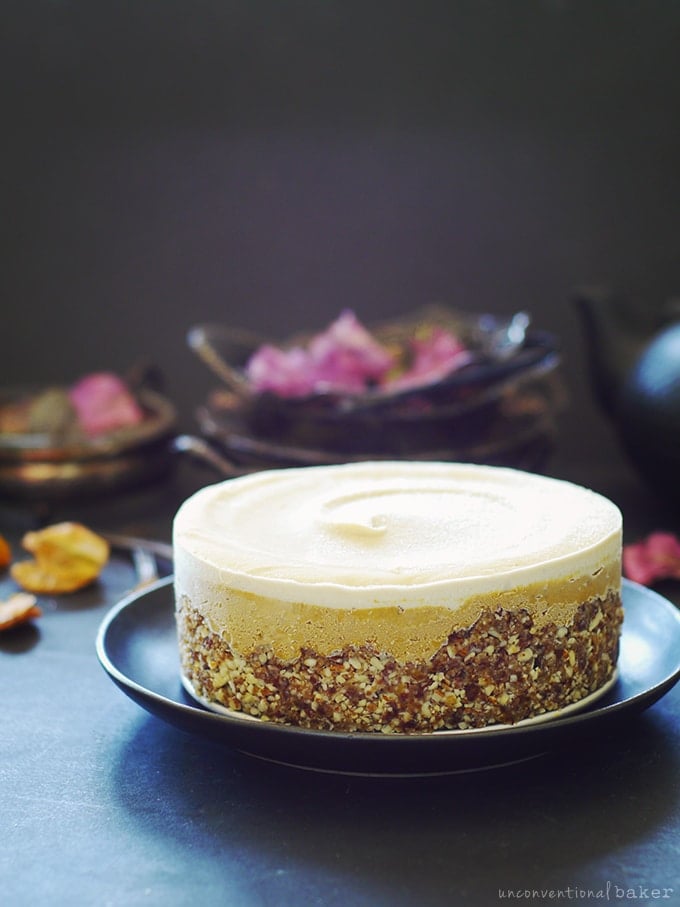 I loved it's simplicity, since it made the recipe completely no-bake. 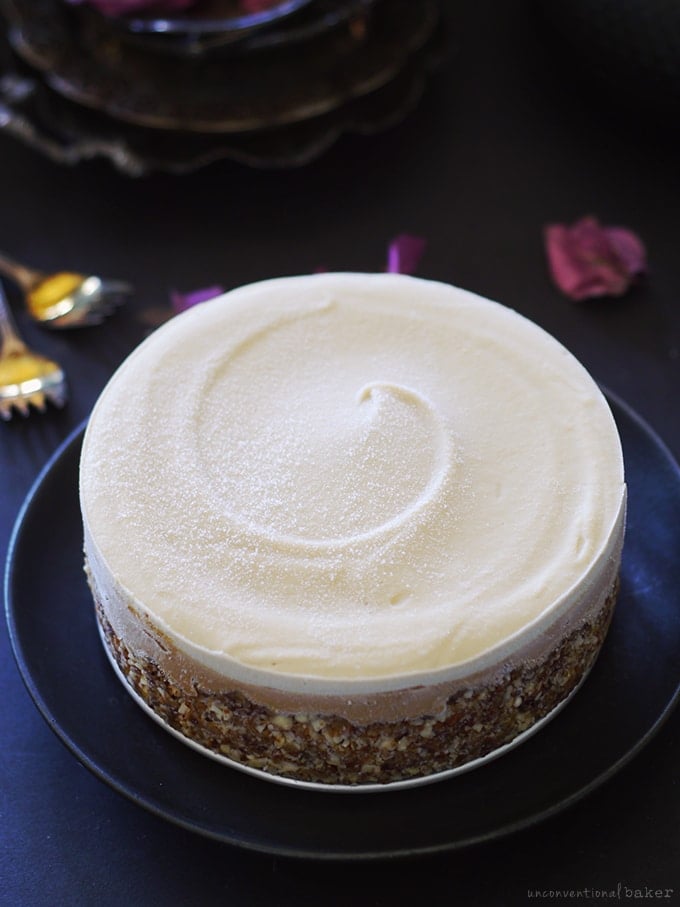 I loved it's new nuttier flavor -- nuts naturally go so well with pumpkin. 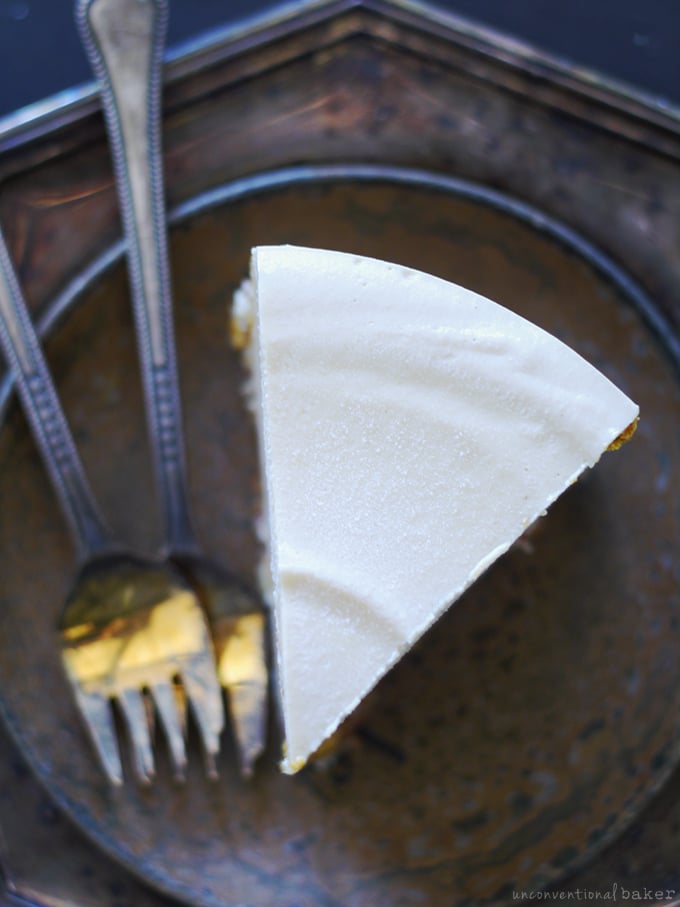 And I loved that it addressed the questions and feedback some of you had with the baked crust. 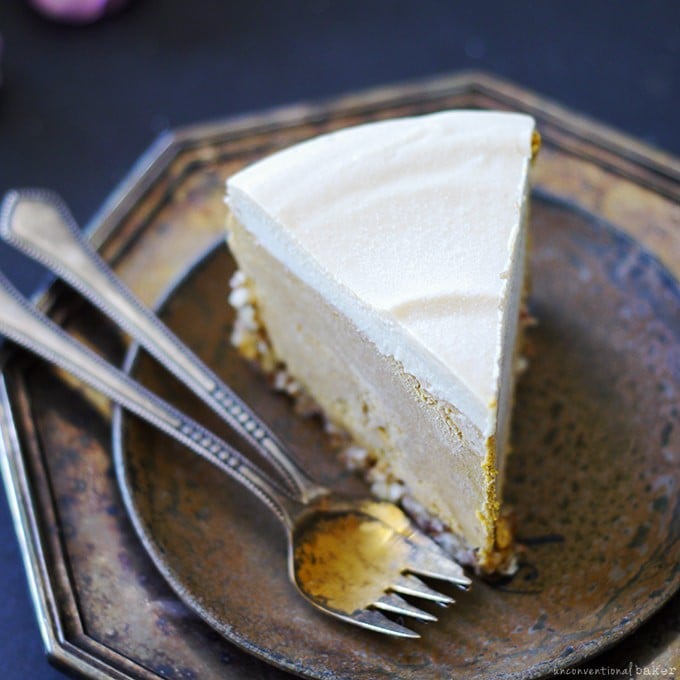 The only down-side is that the baked version has an incredible golden baked crust, the color of which you lose with the nutty crust. Ah, but such is the trade-off -- take it or leave it :) My preference is for the nutty crust so I edited the recipe to reflect that here, but I decided to leave the old baked crust version of the recipe up as well, in the recipe notes. Suit yourself and pick the version that catches your eye most -- baked golden beauty or  almost effortless nutty pumpkin goodness...

A delicious gluten-free vegan pumpkin cheesecake, with a creamy rich texture filled with the some of the best flavors of autumn.

Note: See notes at the end of the recipe below for baked crust alternative*

* Baked crust alternative: Ingredients: 3 tablespoon coconut oil (melted), 3 tablespoon maple syrup, ½ tablespoon pure vanilla extract, 7 tablespoon pumpkin puree, dash of salt, ½ teaspoon cinnamon, ½ cup coconut flour, 3 tablespoon tapioca flour. Directions: Pre-heat oven to 350F. Oil a 6″ springform pan and set aside. Place coconut oil, maple syrup, vanilla, pumpkin puree, salt, and cinnamon in a medium mixing bowl and use an immersion blender to blend the mixture into a smooth consistency (note: if you don’t have an immersion blender, blend all the ingredients in a regular blender and then pour into a mixing bowl). Add coconut and tapioca flours and mix well using a wooden spoon until everything is thoroughly combined. Scoop out the mixture into the springform pan. Use your hands to press the mixture down along the bottom and up around the walls of the pan forming a tall crust (should be about 1/16 – ¼″ thick everywhere). Use a fork to pierce some holes along the base of the crust to prevent bubbling during baking. Bake in a pre-heated oven for 20 minutes. Remove from oven and allow the crust to cool in the pan on a wire rack. Go to step 4 of the recipe to add the filling to the cheesecake and follow directions from there.