A layer of chocolate-cherry ice cream, a layer of cherry-almond, and a layer of pistachio make for a lovely special treat known as spumoni (or spumone) -- a delicious classic Italian molded ice cream dessert (not unlike Neapolitan). 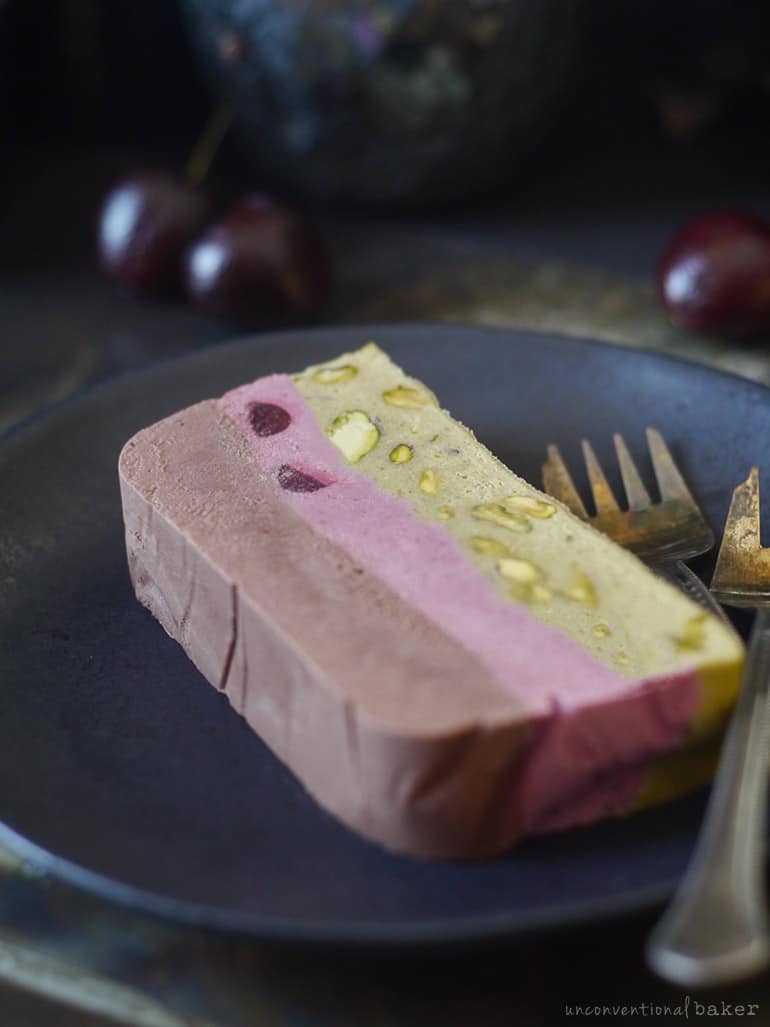 I got the idea to make this treat from Janel, the videographer for Unconventional Baker. She sent me a pic of a spumoni cake she'd seen in a shop and asked me if I thought something like that could be made "unconventional." That was my first time hearing of spumoni, and of a dessert containing these particular three flavors all at once, but after reading a bit about it I thought hey, sounds interesting and I like ice cream, so why not. And so it formed the inspiration behind this recipe. 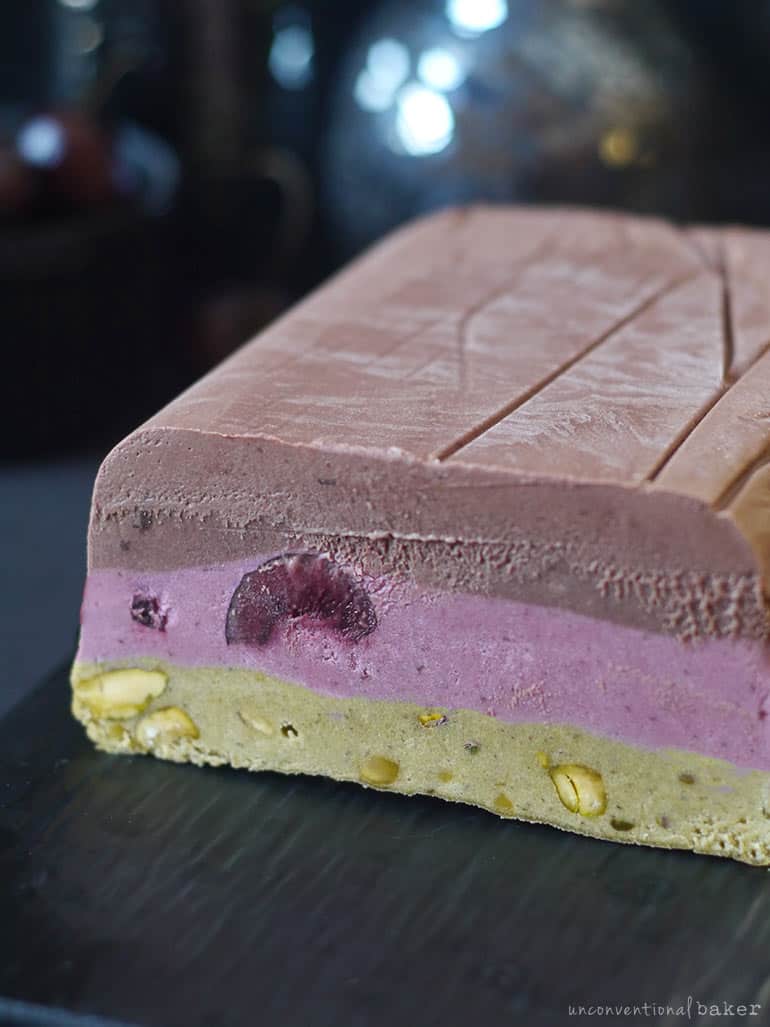 After looking around at some of the best spumoni ice cream recipes (traditional ones, I mean) while assessing what's involved I have to admit that I had my doubts about how good these very different flavors would be all together. I mean chocolate + cherries = delicious. Cherries + almond = lovely. Chocolate + pistachio = yes please. Pistachio + almond = very complementary. But who on earth makes a chocolate, cherry, almond, pistachio dessert all at once?! :D Is it just me?

Then I gave it a go, and you know what -- it's a classic treat for a reason. Somehow all these flavors really come together in one bite. Surprising.

As a fun aside, we had a lot of arguments over here between the dessert samplers. Some were convinced the cherry layer was clearly superior. Some said "no way! chocolate wins by a mile." Some just like pistachio anything. And some were jumping to and fro. I think in the end the overall consensus was that you kind of have to enjoy them all together anyhow :) But one of the important takeaways from it all was that the chocolate cherry ice cream alone (without the pistachio) would make for an awesome dessert on its own too. So just putting that option out there for ya ;) 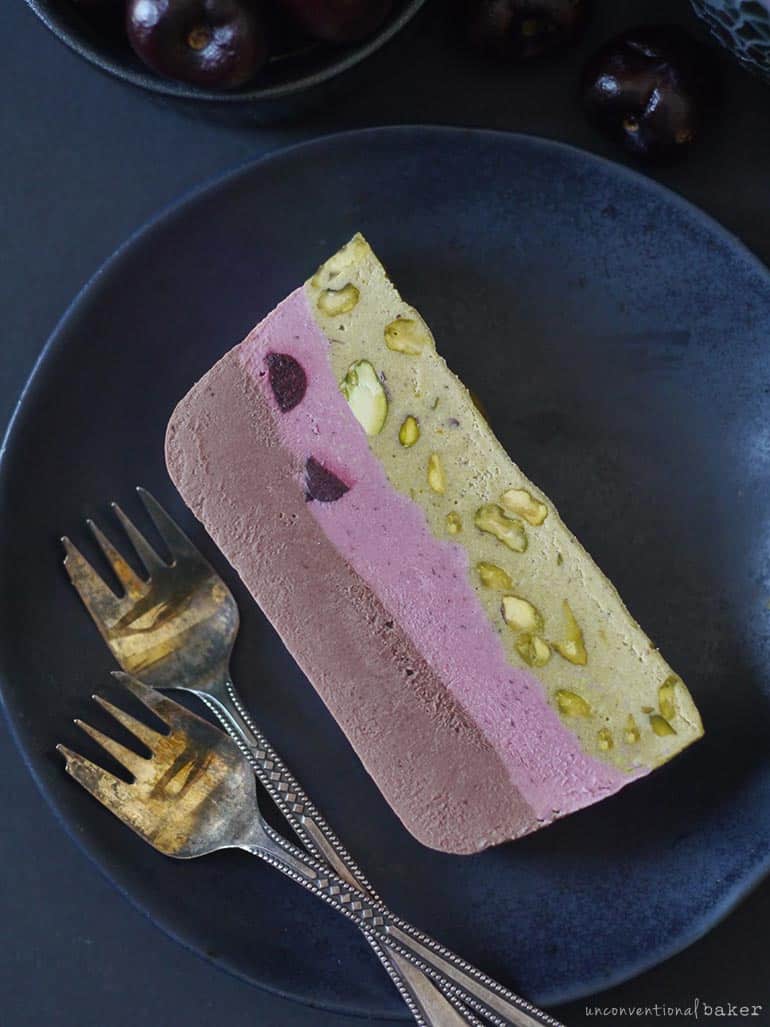 The pistachio layer here is based on this raw pistachio slice recipe, so if you're in the pistachio anything camp, you might want to give it a try. And if you're into Italian ice cream types of desserts, here are a few more options for you:

One small note about the recipe here vs. the photos: you'll notice in the recipe below that the cherry and chocolate layers are reversed. So photos show chocolate first, cherry next, then pistachio. But if you follow the recipe below it will be cherry first, then chocolate, then pistachio. The reason I flipped them is because a) practically it makes for one less dirty bowl to wash (got your back there! ;) ), and b) because the cherry layer with the big chunky cherries in it is a bit "heavier" so it actually sets better first.

One other quick note is that apparently sometimes traditional spumoni is made by folding whipped cream into the ice cream so it's a bit more airy. I didn't go there because... well I like to keep things simple and this was already decadent enough. If you like a softer treat, just let it thaw out a bit longer for a creamier consistency. I imagine thought that if you're determined enough to make it more "airy" you can totally fold in some dairy-free whipped cream into each layer if you prefer (just transfer to a bowl, and stir it in by hand) before putting into the mold. If you try that, I'd love to hear how it turns out. 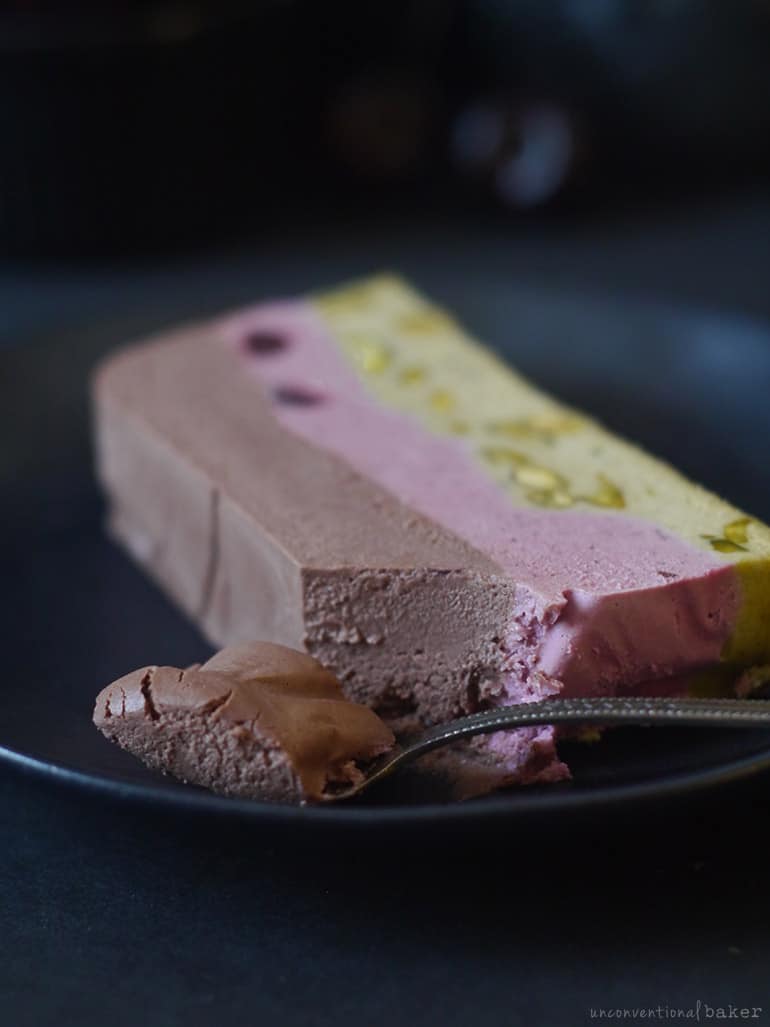 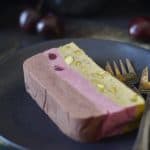 A vegan spin on spumoni -- a molded Italian ice cream treat -- with layers of chocolate, cherry, almond, and pistachio.

**I recommend unscented coconut oil for this recipe so as to avoid adding a coconut flavor. If you don't mind, however, feel free to use regular coconut oil.

****If anything cold goes into the blender, the mixture will firm up pre-maturely and you'll end up with a thick chunky mix instead of a smooth creamy ice cream (this is because of the coconut oil). So it's important everything is at room temperature first.