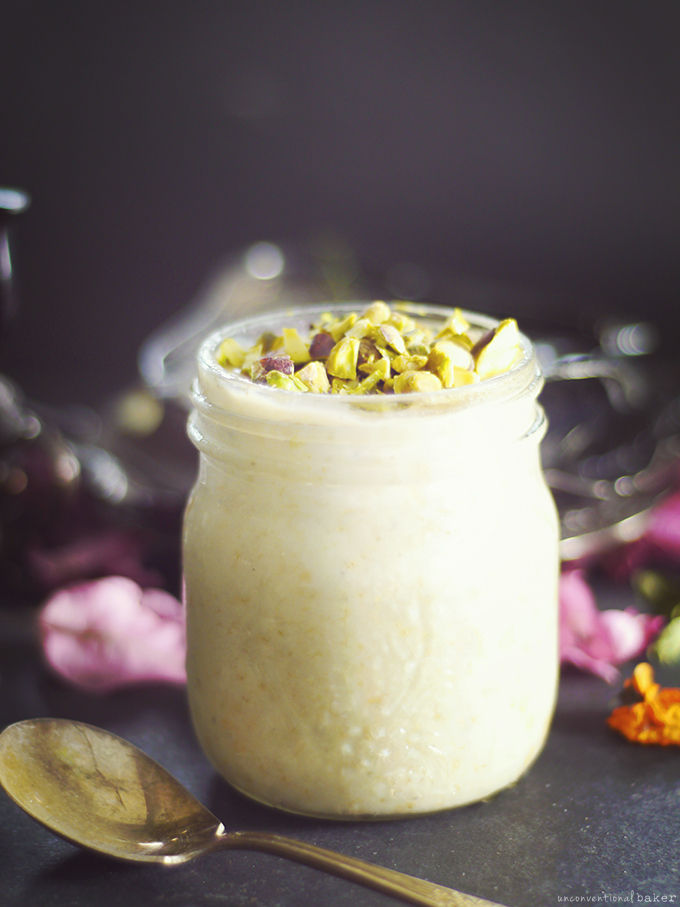 I came across cherimoyas on my last shopping trip. CHERIMOYAS. !!! . My favorite fruit on the planet. If you’ve ever tasted one, you’d be giddy with me right now. And if you’ve never tasted one, well you have to keep reading and get the cherimoya low-down because it’s definitely something to add to your MUST-TRY in a lifetime list… (and hopefully many times over. And then hopefully make this fruit-sweetened cherimoya pistachio custard pudding with them!). 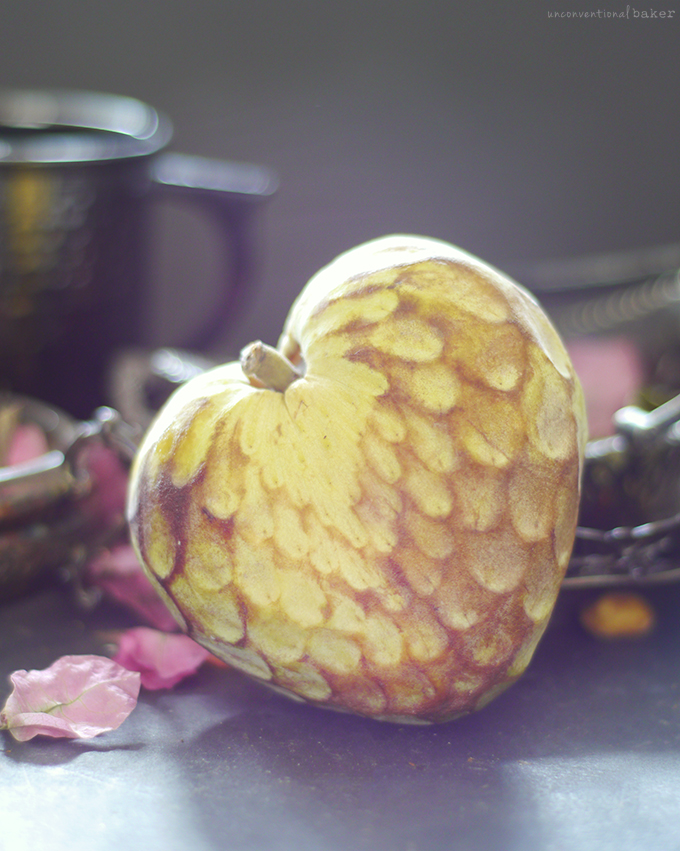 … And if you live in a country where these are readily available, I envy you. The chances of finding cherimoyas in a small town in a cold climate are like twelfth of never…  And when you do find some, the experience is akin to meeting a unicorn… I do occasionally come across them when I visit a larger town… A real diamond in the rough in my corner of the world, but luckily they do make an occasional appearance and I always bring a bunch home. If they cost an arm and a leg, I’d give three of each… Because there’s absolutely nothing tastier than a ripe cherimoya. Nothing. 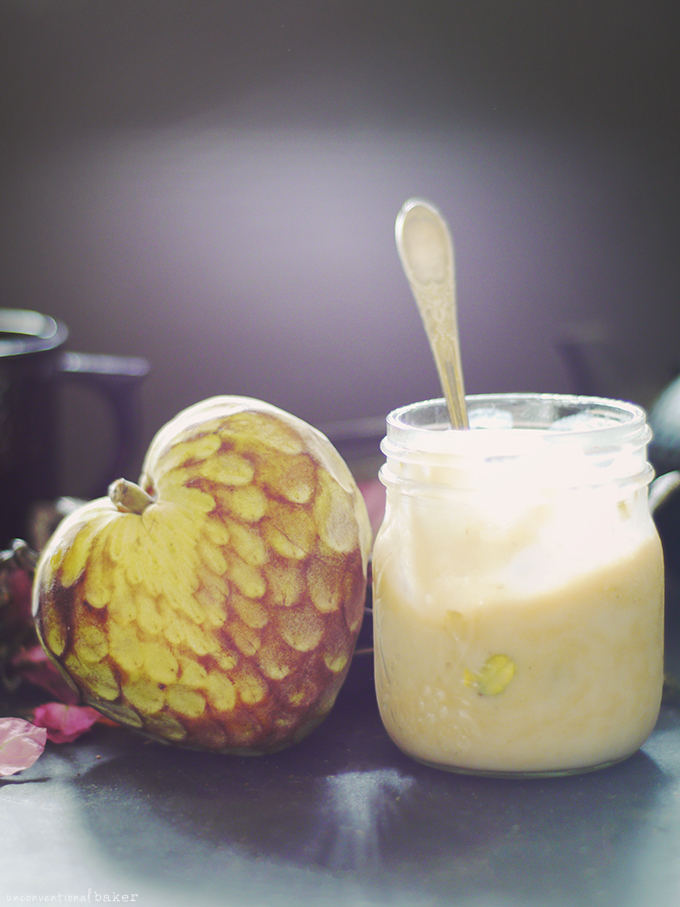 I wanted to share this favorite cherimoya recipe here in the summer (that’s when these photos are from), but things got busy, and I hesitated too because I know most people won’t be able to run to the store and grab some to make this and I like my recipes to be as accessible as possible. So I held off. I later thought to include this custard in Unconventional Treats, but I held off as well — same reason… So it’s just been hanging out in a temp folder, sad and lonely…

…But as I’ve been enjoying it again these last few days, I suddenly changed my mind because you know what? Even if you can’t find cherimoyas right now, I want you to at least know about them so you never ever pass them by unnoticed wondering what that odd fruit is…, and if you ever have a chance to grab one — it’s an absolute must.

And also I felt the need to share because it’s one of those recipes & fruits I will never ever get enough of, so naturally it feels like it deserves a spot in the lime light. After all, we’re after unconventional treats here, right? ;)

What do they taste like? Hm… like unicorn food? ;) They’re very sweet yet somehow mellow, creamy, very fruity, candy-like even… and remind me most of that flavor in Jelly Belly beans you’ve never quite been able to put your finger on… A fusion of tropical flavors. Mark Twain said it’s “the most delicious fruit known to man” and I 110% agree.

What to look for? For starters, they look like this: 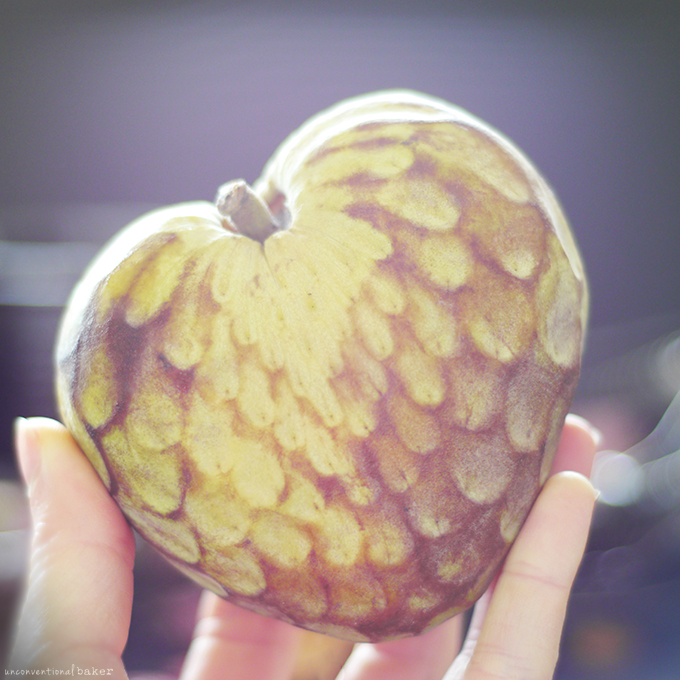 …this little fella is heart shaped — how cute is that?! There are many other tropical fruits with a similar look (to an undiscerning foreigner at least..) and even similar names (the Europeans who “discovered” the Americas were really not all that creative with their names, were they…? o.O). This fruit goes by: cherimoya, chirimoya, or custard apple… or chirimuya in Quechua, the native language in the Andes, where they grow more abundantly.

How to know if it’s ripe: The skin should brown up a little (as depicted here for example) and be a little soft to the touch (note: they brown up more when refrigerated). If they feel firm, they need more time. Too soft is better than too firm with these guys, though somewhere in between is just right (kind of like an avocado). Also keep an eye out on the “eye” of the fruit around the little stem to make sure there’s no mold — that’s where you’ll spot it.

Toxicity must-know: while cherimoyas are absolutely safe to eat, their skin and seeds are toxic, so be sure to only eat the flesh and discard the rest. I learned this the hard way… I’m really an experimental eater and tend to not read up on things but just experience them more intuitively… usually it’s the best way for me to experience a new taste without any ideas tainting the experience, but this time it backfired. I knew straight away you don’t eat the seeds — those things are massive. Common sense told me to discard. But the peel I tasted and it was alright, so I proceeded to blend it into my food. BAD IDEA! Massive migraine later I knew something was up, so I went researching online. Yep, do not eat the skin! 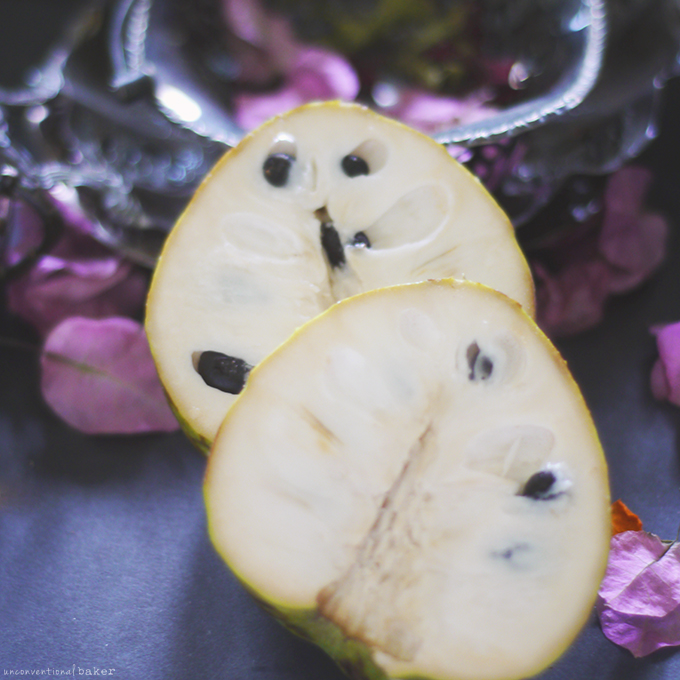 How to eat cherimoyas: The easiest way is to slice the fruit in half, then use a spoon to scoop out the flesh and enjoy, just be sure to spit out the seeds as per above. When you eat it like that you suddenly understand why the fruit is called a custard apple. Well, truthfully, the “apple” part still confuses me — seems like everything that grew on a tree was called that by those aforementioned explorers back in the day. But the custard part is spot on. And if you chill the fruit first, it becomes ice-cream like. Honestly, if you could have unlimited ripe cherimoyas and a spoon, that’s the only dessert you’ll need in life! (Good thing they’re rare, so I can stay busy baking :) )

But you know what’s even more amazing? It’s this raw custard mixed in with pistachios. That’s what you’re here for after all, right?! :) 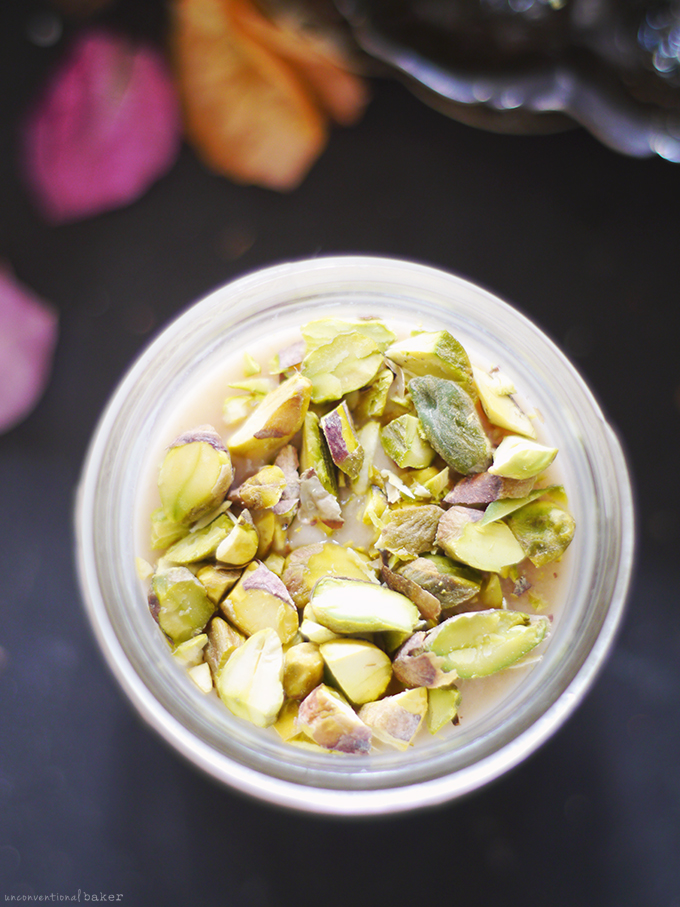 Honestly, I never thought I’d taste anything better than a good cherimoya, but after blending it in with a tiny bit of good almond milk, a dash of salt, and pistachios, I proved myself wrong. This custard is only the best little dessert in the world. 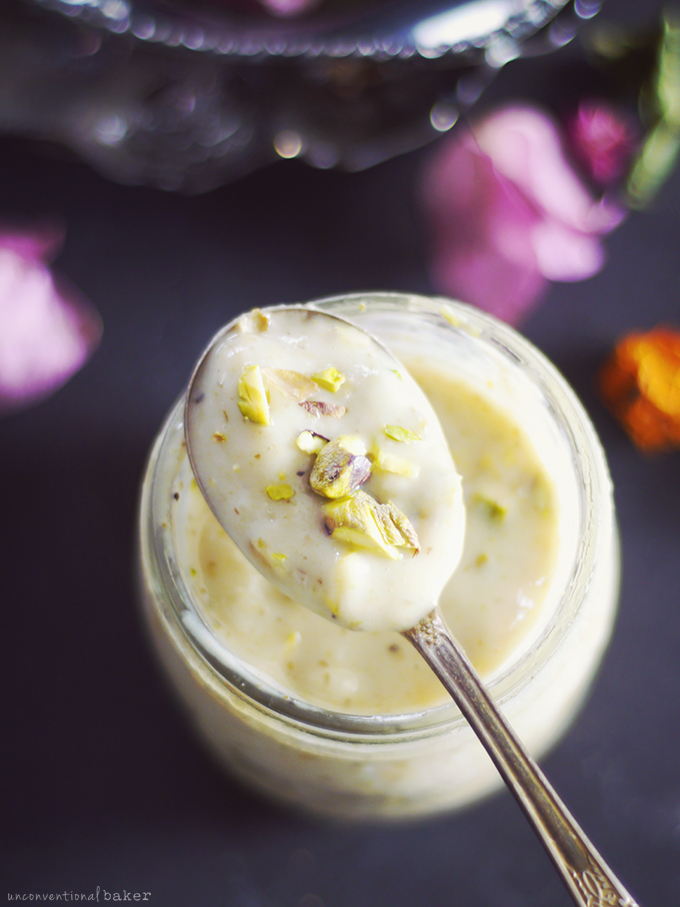 The only difficult part is de-seeding. Pain in the behind, which is why you don’t see many recipes using cherimoyas — so much easier to just eat it with a spoon and call it a day, only you have no idea how tasty the custard is… so don’t curse me as you’re doing it… ;) promise, it’s worth the effort. Once you’re done picking out the seeds, it’s a breeze from there. I like to cut mine in half, then scoop out the flesh into a shallow bowl or on a plate, then pick out the seeds with a knife. Then I transfer all the remaining flesh and any juice that escaped in the process into a small blender (I use my magic bullet since it’s a small job). That way you lose the least of the fruit in the process.

Note: make sure the almond milk (or cashew milk) you’re using tastes good here. Because it’s such a minimal list of ingredients, if you use a milk you don’t enjoy drinking on its own, you’ll end up tainting the custard too. So everything you put in must be tasty first and foremost.

Lastly, a note on texture and freezing times: you’ll need to chill this, but the chilling time can vary. Stick it in the freezer for an hour, and you’ll have a nice custard / soft-serve ice cream. The timing is key to the right texture — if you catch it in the right moment it actually transforms into the best ice cream ever. Freeze it too long and you’ll have a popsicle though — not recommended. Sometimes I make this ahead of time and freeze overnight, which means “too long” for a good texture, which means I thaw it out a little before tucking in. Play around with the chill time until you find the texture you like best. So long as it’s chilled it’ll taste amazing at every stage. 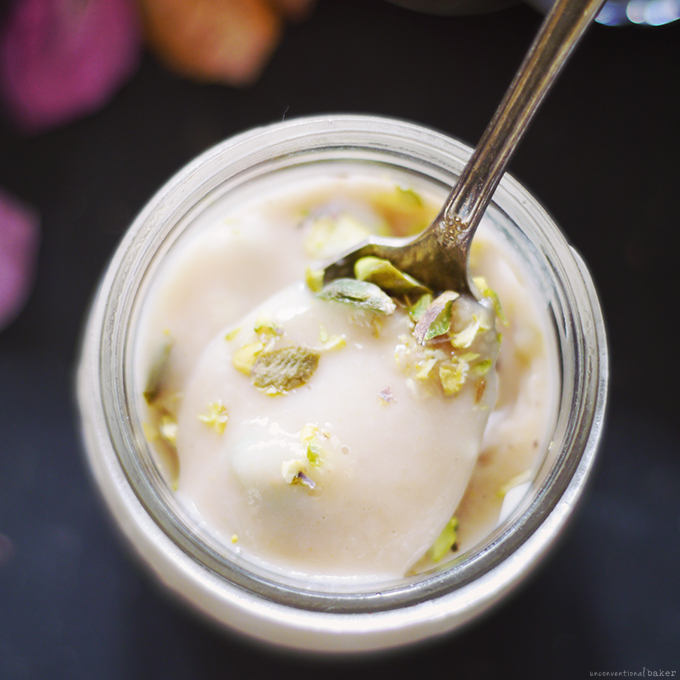 This post contains an affiliate link to the magic bullet blender I used for this recipe.