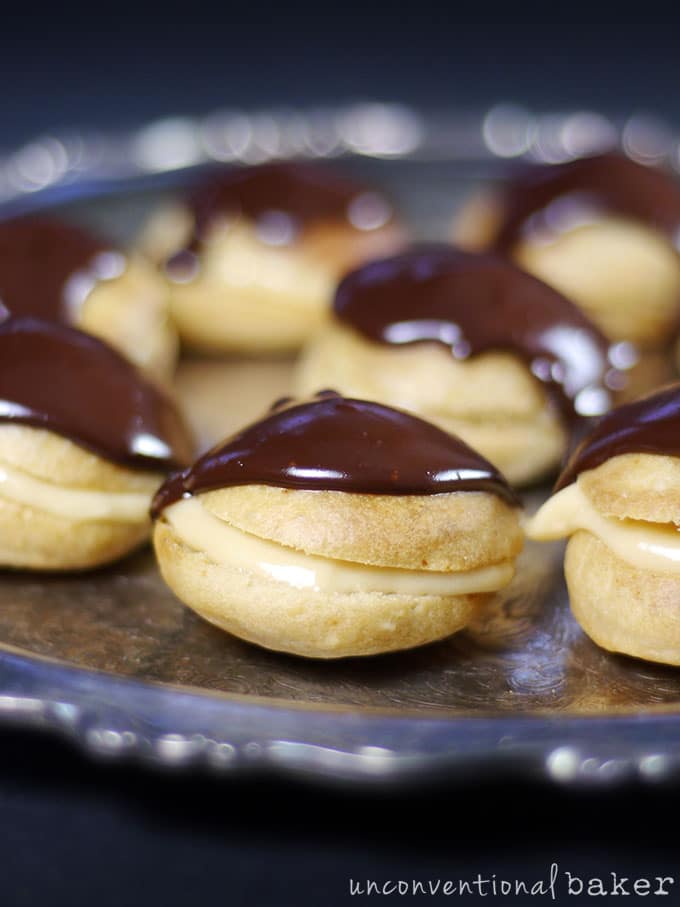 Truth be told, this recipe is a bit on the fussy side {and I’m usually not a fussy baker…} — but not because it’s difficult in the least, rather only because there are some basics you need to understand first before you embark on this mini-eclair adventure {and because I want you to learn from my mistakes, which were plentiful!}, especially if you’ve never made eclairs or cream puffs before. So, if you want a bite of these little beauties, you’ll need to read the long and short of it {no getting around it — sorry!}. 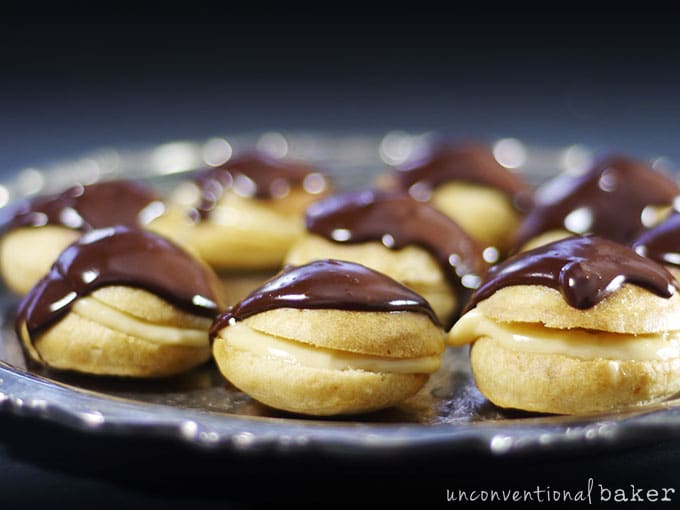 Oh, but where to begin? In January I ran a giveaway on the blog and I asked people to share their absolute favorite childhood treat, in the hopes of then re-creating some of those recipes for you. Nancy’s comment caught my eye straight away:

I absolutely loved eclairs growing up, in all shapes and forms, and until I read her comment I didn’t realize just how much I missed this little treat. Easy, peasy I thought. I mean, I knew it would be somewhat challenging to replace eggs, dairy, gluten, and sugar {amongst other things} in one treat, but I still thought “how hard could these little puffs be, right?” WRONG! Well, sort of…

Not entirely wrong. I got to work straight away, did a bit of research, and I actually nailed the recipe on my second try. Amazing, isn’t it? I was blown away by just how easy it actually was. It was midnight, the little beauties were puffing up in the oven like magic. I did a little happy dance, filled them with whipped cream {to make cream puffs}, snapped some beautiful photos, and called it a night. The next day I wanted to re-make the recipe into custard-filled, chocolate topped mini-eclairs, as Nancy requested, but to my horror I found out I could not reproduce the results. Like AT ALL! Not even close. I thought I noted everything down very carefully, and yet the recipe just kept on failing.

I made batch after batch for a whole week straight. I tried a billion different oven temperatures, pots, pans, flour mixes, ingredient proportions, egg-replacers, went through thousands of blogs sharing their eggless eclair fails, watched thousands of videos of traditional eclairs, cream puffs, profiteroles, followed every tip imaginable {including some super hokey stuff!}… Still NADA. I was absolutely tormented by these little eclairs. I just couldn’t understand what kept going wrong. I walked around in a daze like a mad scientist for a week straight. Kept opening the fridge and looking at the beautiful cream puffs I had in there {to make sure I didn’t just imagine them} and not understanding why instead I just kept ending up with this over and over again: 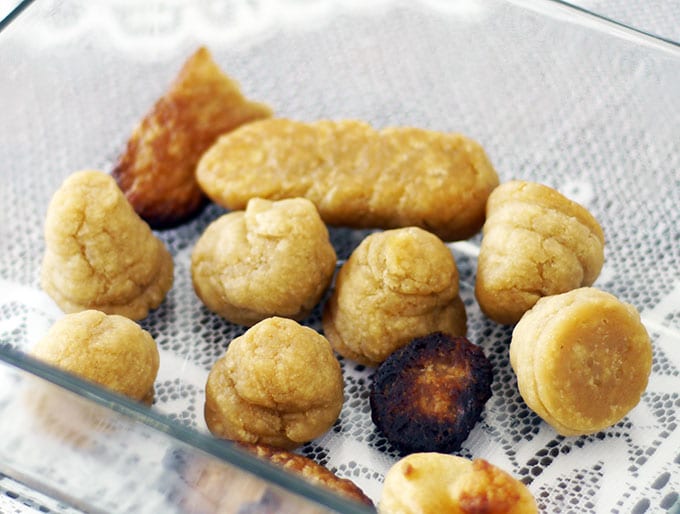 Nice sight, isn’t it? Haha :). Well, I ended up with MOUNDS of these… {lumps?}… in various shapes, weights, flavors, and sizes. You seriously have no idea the amount of ingredients I went through. I was very ready to give up many times. My husband was also super unhappy both with how obsessed I was {I call it determined ;) } and with the amount of ingredients wasted… He kept urging me to just call it a day, he said you guys would understand, I don’t have to succeed at every recipe, etc. I knew he was right, and I nearly agreed many times {in fact I did, but then the next day I woke up with new ideas…}. But the fact that I made them, and that they were so delicious {and I had the photo evidence to prove I wasn’t crazy!}, I just couldn’t stop. After a week straight, I felt utterly defeated and promised I won’t try any more. The next day I woke up finally remembering what I had done differently that one time, gave it one more go and BAM — I succeeded! And oh, man was is such a simple detail I’d been missing! You can only imagine how ecstatic I was the recipe wasn’t a failure after all, I am sure :)

Then I made many, many more batches to make sure it wasn’t a fluke again. I even made a video to show you guys so that you can see what things should look like at every step — I really want to make this easy for you so you don’t end up like “mad scientist Audrey”, you know? :)

{P.S. A huge thanks to my husband for putting this video together for me. I must admit that videos aren’t my thing, but I felt it necessary for this recipe. I don’t have the best set-up for videos, but I hope that whatever we were able to whip up here is helpful to your eclair making}.

But first, let’s cover a few basics. Eclairs and cream puffs / profiteroles get their texture, flavor, color, and “puff” from a basic combination of flour, water or milk, some butter, a hint of sweetness, and a lot of egg. The basic classic recipe for choux pastry {that’s the name of all these puffy goodies} is the same. The difference in recipe names is more or less what you fill them with. There are many ways to make successful gluten-free eclairs. My friend Brianna @ Flippin Delicious has a great version up, for example {if you don’t mind dairy and eggs, etc.}. There are many ways to make successful eclairs that are dairy-free too. But to make an eclair that is free from gluten, eggs, dairy, and sugar is quite a feat! Do a little search for homemade “eggless” or “vegan eclairs” in a google image search, and you’ll see for yourself the kinds of things people are ready to accept as “eclairs”… ;)

The main challenge, I’d say is that eggs are sort of an essential ingredient that gives these little guys their quick rise and hollow center. But the egg-replacer you use here can’t be a heavy or a gummy one — so no veggie/fruit purees, no flax and chia eggs, no tofu, etc. Most recipes I’ve seen that semi-succeeded used something like an Ener-G egg replacer, a product I don’t like to buy because it just ends up sitting on my shelf forever and usually contains some ingredients I’m not a huge fan of, etc. So I made my own egg-replacer powder — easy peasy! Look at these little cuties puff up :) 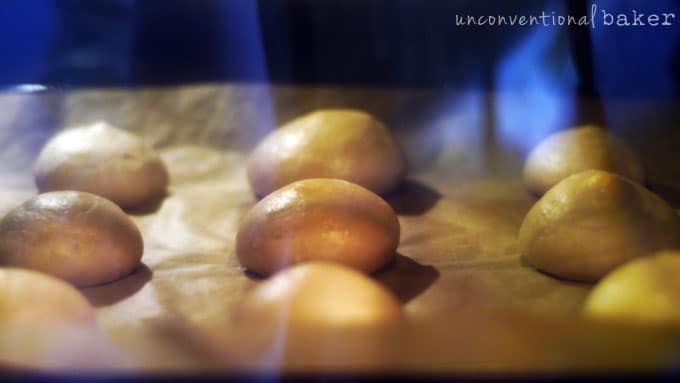 Another important component to a good choux pastry is the texture of the batter. This is where my recipe differs significantly from any other eclair recipe you’ll see out there. Traditionally, you bring some milk or water and butter to a light boil, and then add in the flour, put the pan back on low heat, and cook the batter for some time to let the moisture out before adding in the egg replacer. HOWEVER, the gluten-free flour combination I used here absolutely fails if you put the batter back on the stove and cook it, or if you even warm your butter/milk mixture too much. It just turns into a gummy mess and you end up with those fail “lumps” I showed you a photo of a little earlier. So please follow the directions carefully, and though I’m not usually one to discourage experimenting, note that if you use a different flour blend in this recipe I’m really not certain as to what you’ll end up with! Why did I choose to use this flour mix if it’s so different? Because hands down this tasted the best of everything else I tried {and I tried many, many things!}. This tastes just like a real choux pastry. And the recipe is not fussy at all if you follow it. It’s just a little “unconventional” ;)

The last thing I’ll note here is that I did not have success making these into large eclairs. You can elongate the shape a little, but because of the lack of eggs and gluten, they don’t puff up as much, so the larger you make them, the flatter they’ll be. After much trial and error, I concluded that 2-3″ little eclair puffs were the optimal size for flavor and texture. And in the end, whether I get to eat a few smaller eclairs or one large one, it really doesn’t matter. The point is it’s ECLAIRS! And they’re dairy-free, egg-free, gluten-free, and refined sugar-free. And I can eat them! I rest my case :)

So watch the video above, note the consistency and texture of the batter and egg-replacer {very important!}, note that the butter/milk mixture should be warmed on absolutely the lowest heat possible, just until it all melts and incorporates, and get to it :). The resulting eclairs will be very rewarding, even if there’s some trial and error in the process {trust me, I now know all about it ;) }!

Final notes: through all my fails here, I had done a lot of research, read what worked and mostly failed for others, etc. I had gotten ideas from a specific type of vegan eclair recipe that seems to be very popular around the web. I couldn’t find where the original recipe came from though, so just giving credit and a thanks here to this blog, which was the main one I used for reference. This video was helpful too. 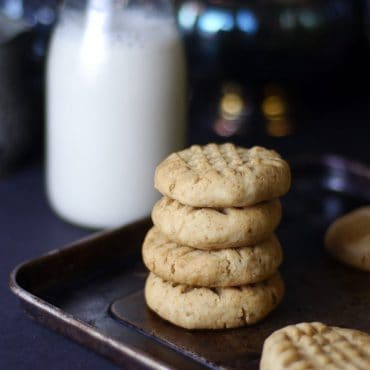 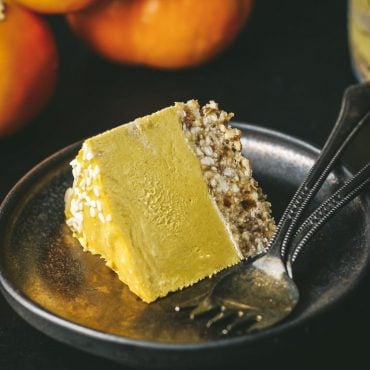