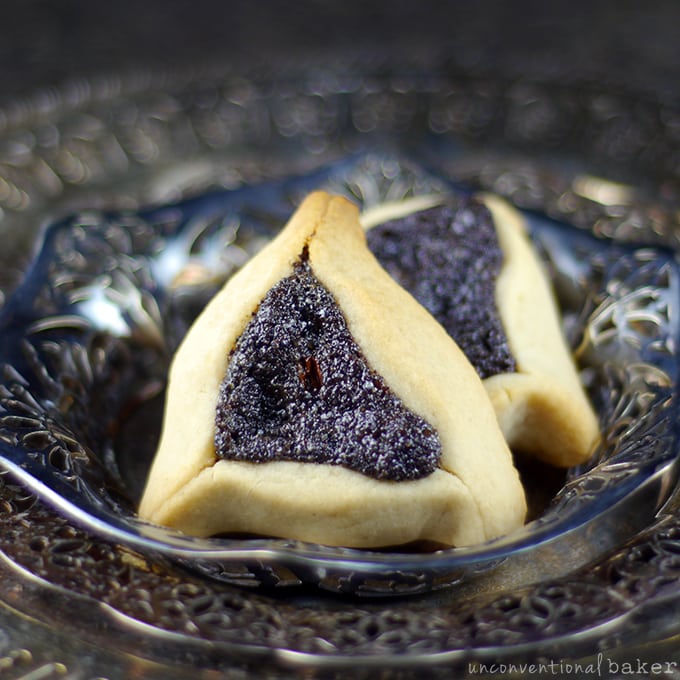 I’ve been really into exploring international sweets lately. Well, actually that’s not true. I’ve always been into exploring ethnic treats of all kinds! ;) But recently a I’ve been experimenting with making all kinds of sweet Mediterranean dishes and I must say there must be something up in the waters there because they seriously have some of the best flavor combinations: think moist cakes, desserts soaked in syrups, rose water, pistachios, almond treats… and then there’s a whole lot of semolina, butter, sugar, eggs, and milk — all of which I’m of course passing on here ;).

These gluten-free vegan hamantaschen cookies with poppy seed filling come to you as a result of this exploration. I have many generous friends who shared their hamantaschen cookies with me over the years and I have to say these little triangle cookies are absolutely scrumptious and addictive! In case you’re wondering what hamantaschen are — they are a sort of shortbread pocket filled with delicious fillings of all kinds {like apricot jam, a prune filling, or a poppy seed filling, etc.}, traditionally made for a holiday called Purim.

Of all the traditional fillings I’ve ever tried for these cookies, poppy seed has always been my favorite — something about turning those little seeds into a sweet pasty filling is just amazing! The trouble is it’s usually made with eggs and dairy, but not to worry — I tackled this one for you and made a filling that is not only free of those things, but also requires no cooking {a score on both accounts if I may say so ;) }. And it tasted so good I just wanted to spread it on EVERYTHING {in fact I did do just that… you may want to make extra! :)}. 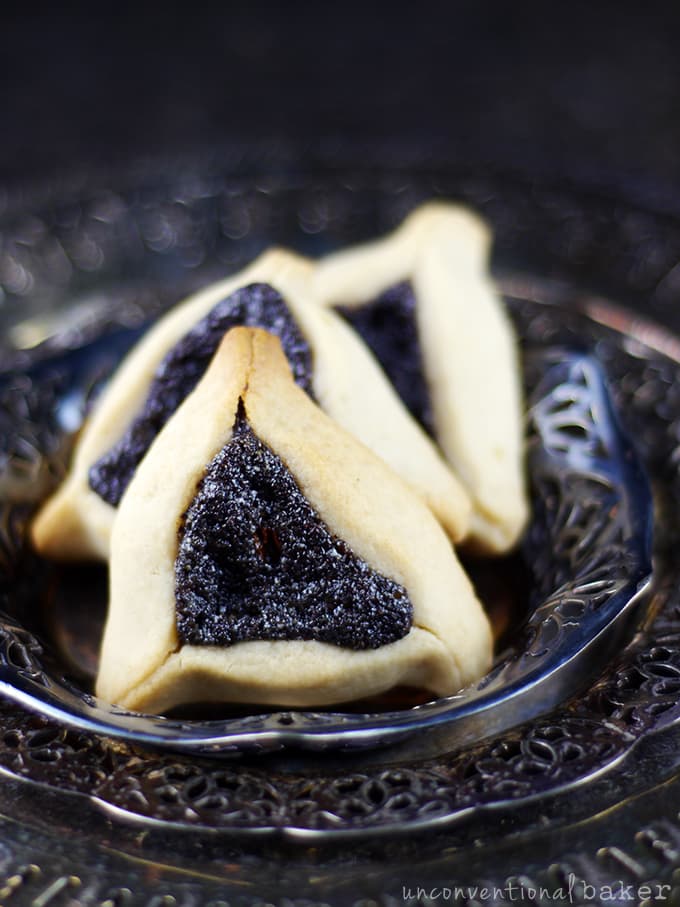 Seeing as Purim is just around the corner, I thought I’d share a recipe for those looking for a gluten-free, dairy-free, and egg-free {and of course refined sugar-free, as always} variation of these awesome little cookies — allergy-friendly hamantaschen cookies with my favorite poppy seed filling! 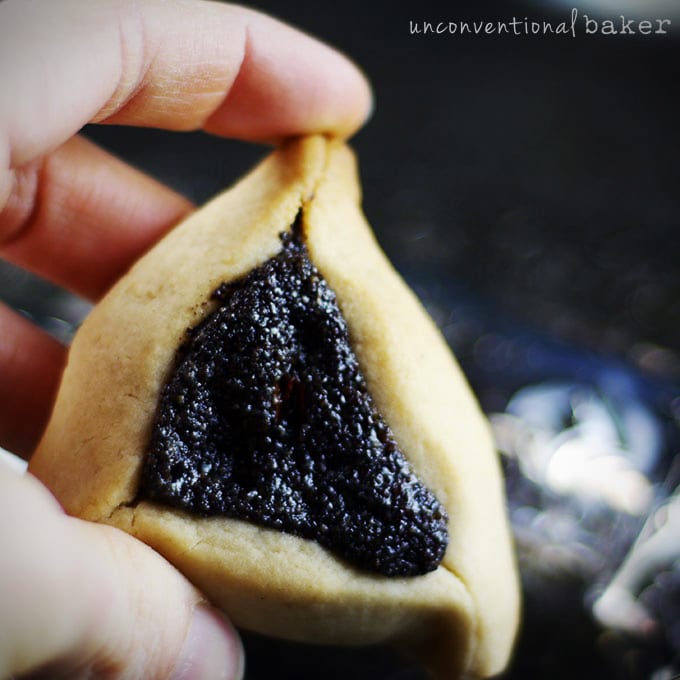 Even if you don’t celebrate Purim {it’s a kids’ holiday after all}, I still think these cookies are totally worth making anytime. They are always the first to go whenever I bake a cookie assortment. I’m sure you’ll absolutely love these + look how stunningly bejeweled and sparkly they look! ♥ Totally perfect for serving at a dinner party or enjoy with a nice cuppa in the evenings…

Oh, one word of caution for filling these — it’s VERY important not to put too much of the filling in, or else they’ll burst. It’s such a common problem that there’s even a hashtag for it on Instagram! {Look up #hamantaschenfail}. So here’s an example of how much filling to put in: 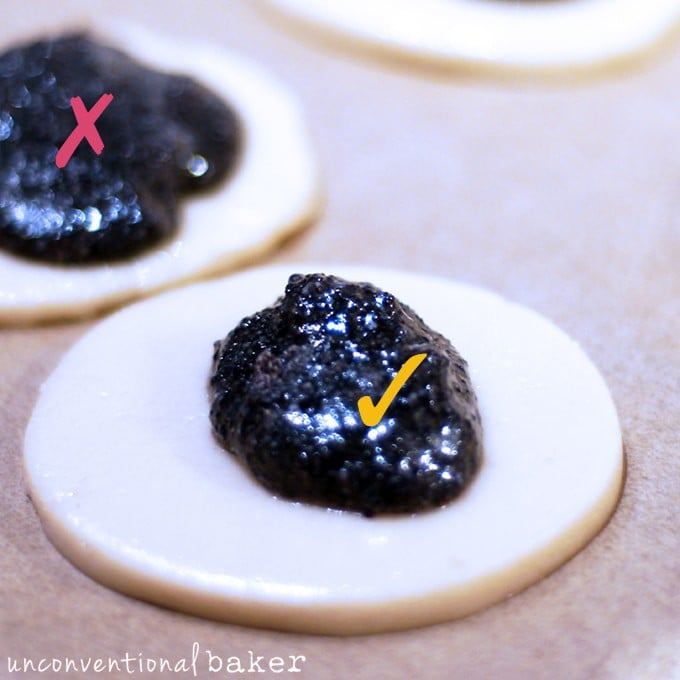 Now that you know that, onwards to these cookies, then! 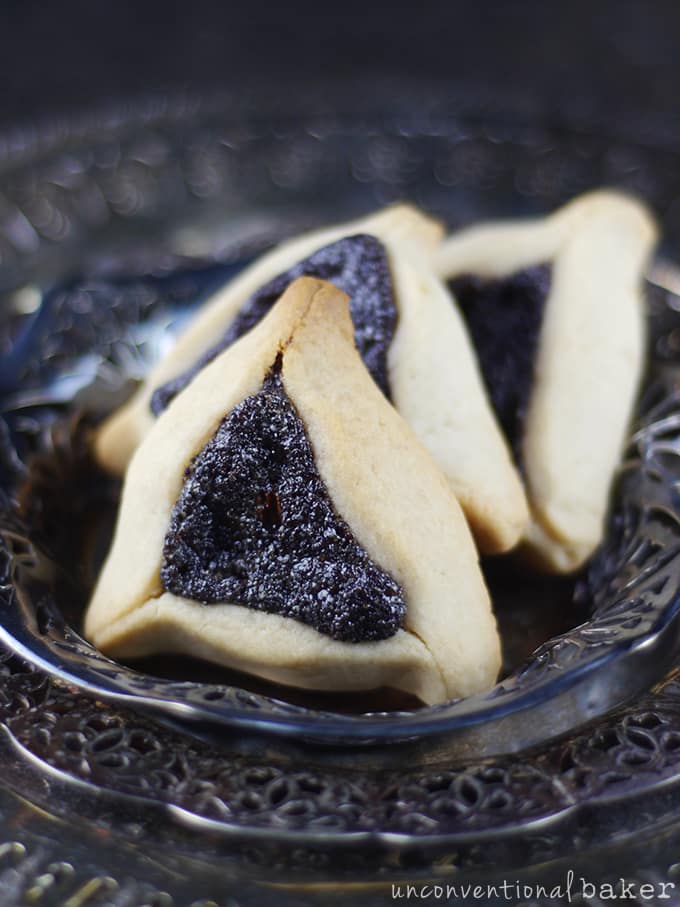 Note: this recipe has been recently updated to be made simpler to work with. Another variation with apricot jam and extra tips has been added to the recipes section as well — if you’re curious, apricot hamantaschen recipe is here.

Disclaimer: this post contains an affiliate link to the Magic Bullet used. 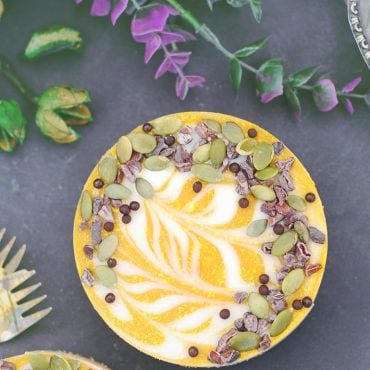 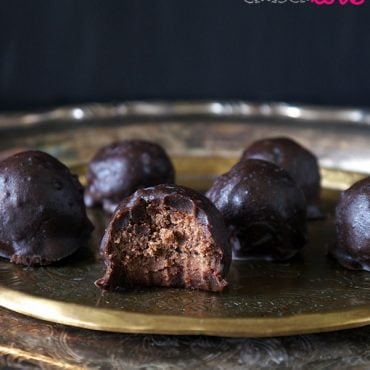