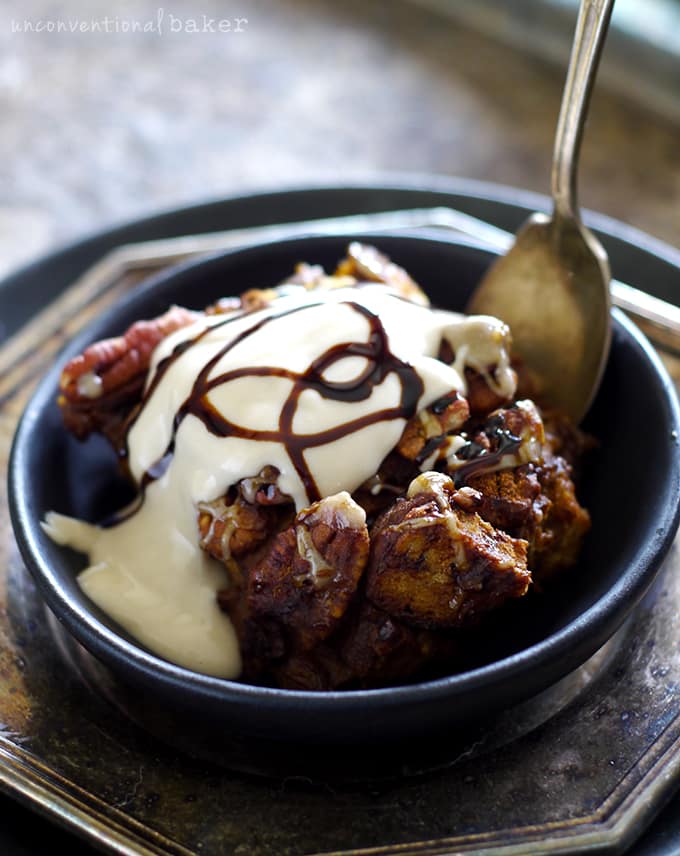 Sometimes a kitchen accident is the best thing that can happen. This pudding is the result of such an accident and I’m so excited about it I’m almost wishing for more accidents so that things like this can come out of my oven more often :) . Seriously, I think this is on my top of the top favorites list of desserts {or breakfasts…} and it’s just a bread pudding. Yep, it’s that good!

I was playing around with a new recipe for a cinnamon raisin bread last week {just having fun with aquafaba experiments} and baked the most delicious-smelling, beautiful-looking radiant loaf of bread. My whole house smelled incredible and everyone kept sticking their noses in the kitchen wondering what’s cooking and whether it’s ready yet… 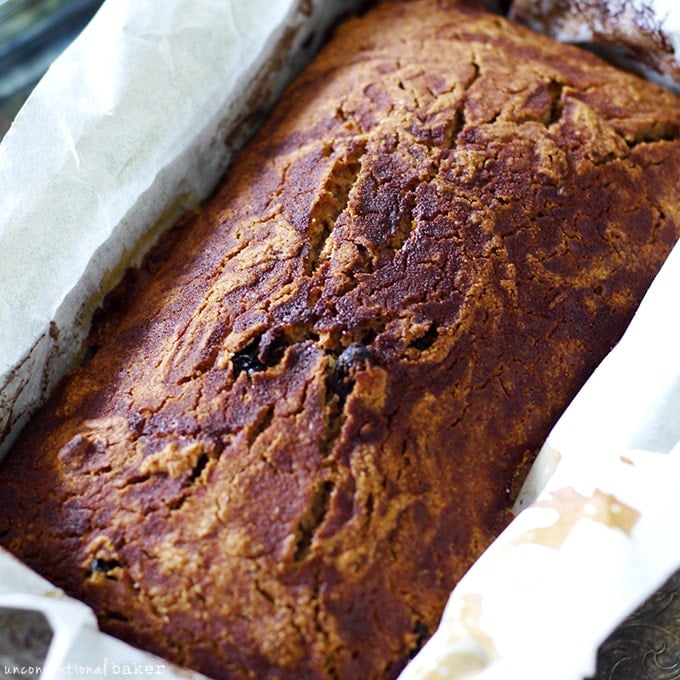 I couldn’t wait to slice in, but when I went to lift it out of the pan I realized something was seriously wrong. It was heavy as a rock! And dense. SO DENSE. It was no raisin bread — it was a raisin brick! So disappointing because it smelled so good… So I sliced in just to see… 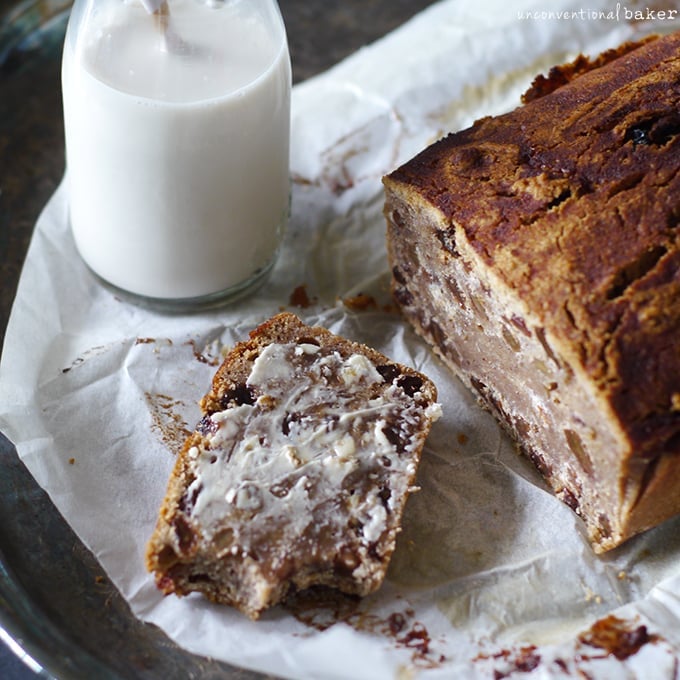 …dense as a rock, but really delicious! I really felt bad throwing it out — it tasted good. What to do…? I contemplated bread and butter pudding and french toast, but settled on pumpkin spice bread pudding — just seemed like the best idea somehow. I was being pestered for more pumpkin cake anyhow since last week, so figured why not — maybe that’ll satisfy them pumpkin cravings… 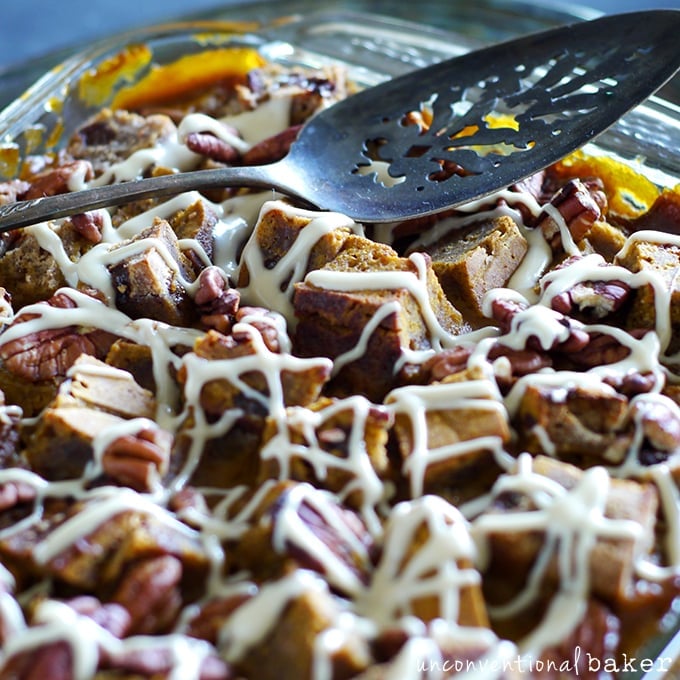 So I made it, and it was AMAZING. I can’t even describe how amazing it tasted — all warm, gooey, pumpkiny, sweetly spiced, and all-in-all delicious. Plus just seeing that white cashew drizzle on top made me happy :) And the second round of aroma therapy engulfing the whole house while this was baking was more than welcome.

I was so excited I just wanted to share the recipe right then and there. The excitement the above photo generated on facebook and instagram only confirmed the need for this recipe to get out there. But there was a big BUT in the way — I realized I can’t share a recipe where one of the main ingredients is my failed loaf of bread :D . And so I decided to do a take two — this time with a commercial gluten-free loaf of bread. 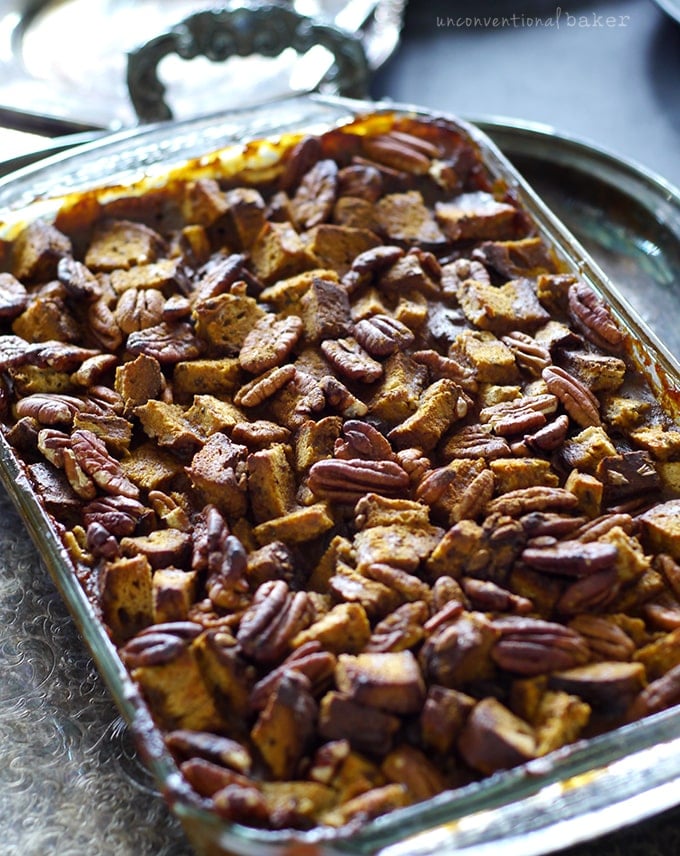 I have bread so rarely though that I didn’t have any stale bread on hand {as stale bread is what you’d normally use for a bread pudding}. I fished around my freezer and found a couple of old frozen loaves. I quickly toasted them in the oven to thaw them out and “stale” them. Then gave the recipe a try again… 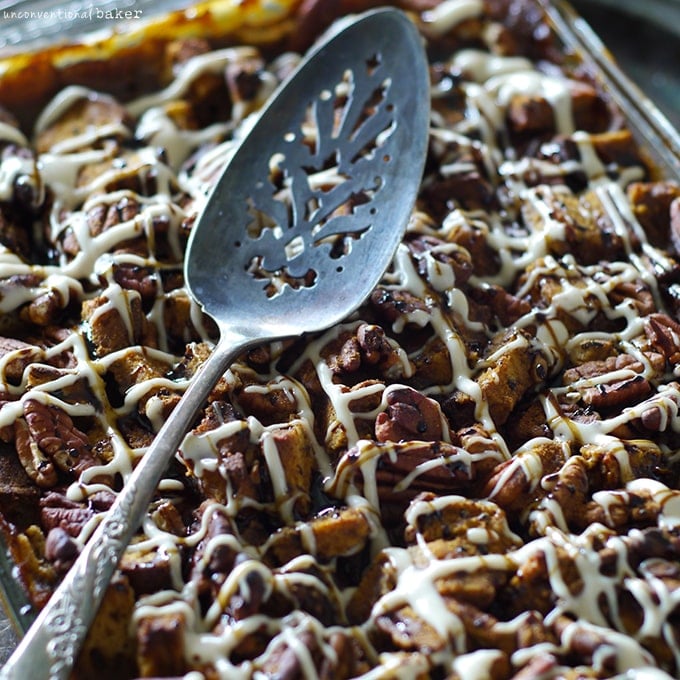 Can the tastiest pumpkin spice-loaded recipe get even tastier? OH YEAH! This turned out soooo good. I was really glad it worked so well with a commercial bread. I was also glad that just toasting the bread did the trick in terms of getting that “stale” firmer texture. So yeah, seems like pretty much any decent-tasting bread {or a firm fail cake, muffins, or loaves} will work here. By the way, if you can pull off and oil-free bread/cake base, then this recipe can be considered oil-free too for those interested… And of course you can go with a grain-free bread if you prefer. 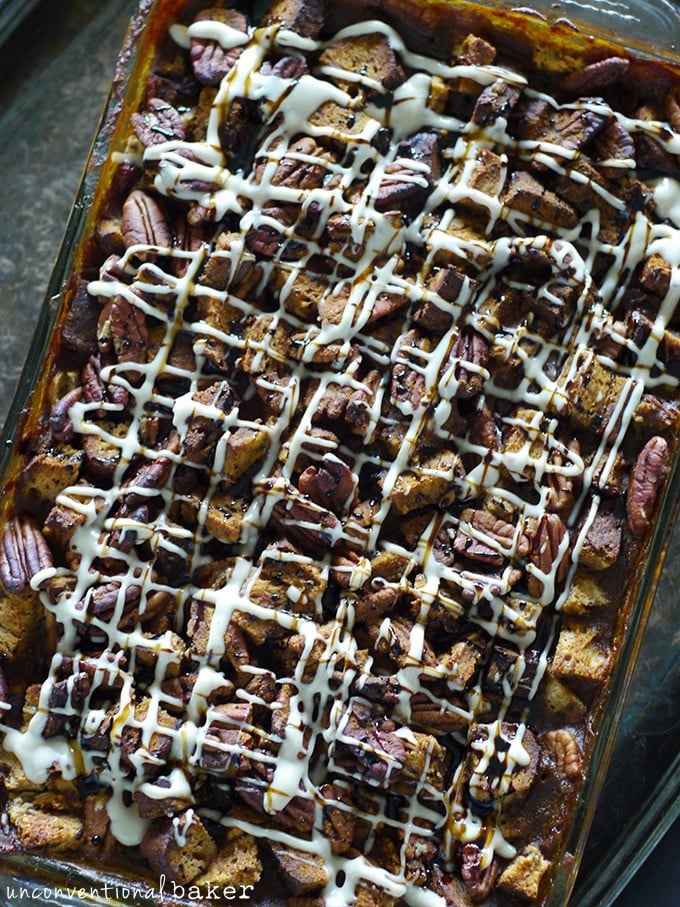 I also made a few tweaks based on feedback on the previous loaf — everyone said they loved the crunchy top and wanted even more crunch, so I upped the nuts and that did the trick. Also leaving the very top layer not fully covered with the pumpkin mixture helped crisp up the upper layer even more — delicious! I also added a bit more tapioca to thicken the pudding — that worked really well. If you prefer your pudding to be more saucy though, just cut back on the tapioca starch and it’ll be delicious that way too. 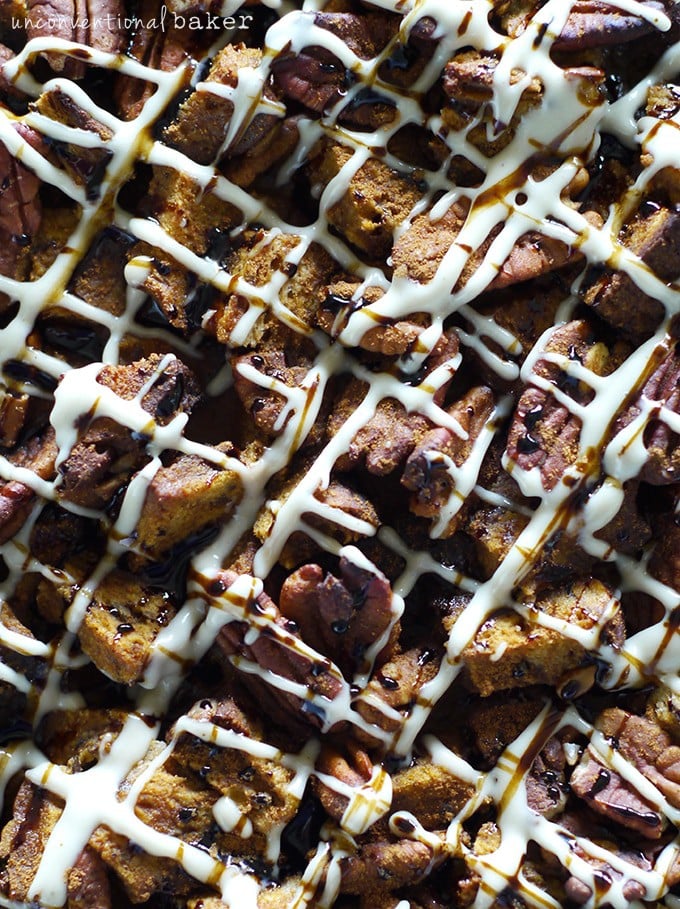 And then I realized I forgot something very important on my first trial run — molasses! That really sealed the deal for me. Molasses in the pudding. Molasses drizzled on top. Took this recipe from amazing to AMAZING. 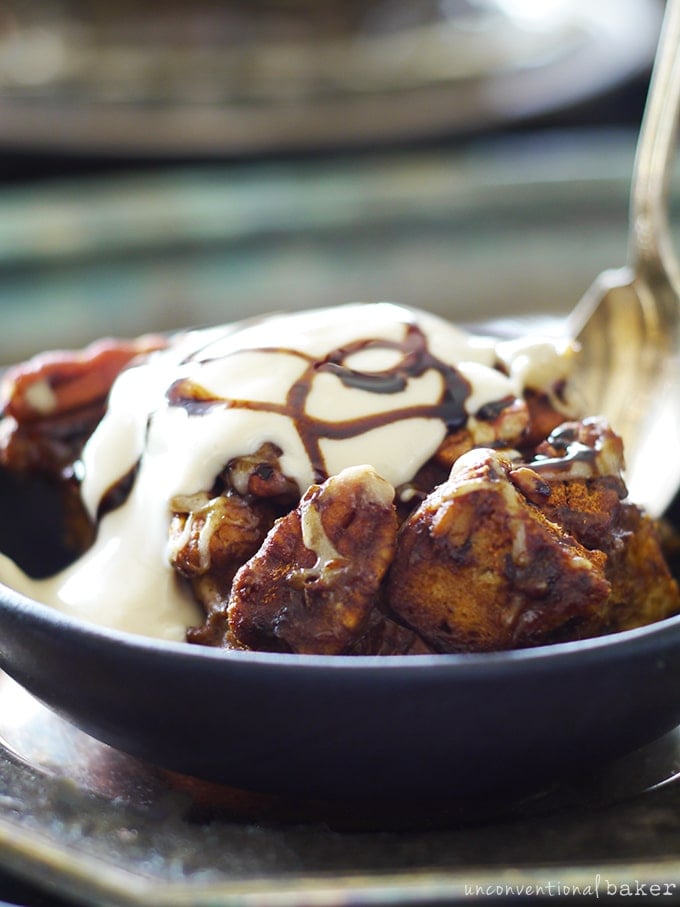 Ok, I’ll stop with the caps and excitement now. This recipe was just so good I can’t help it. Sorry, I’m doing it again! :) And the best part is that it’s the easiest thing in the world to make. Such a perfect fall recipe or a holiday breakfast… Mmm… I’m officially kicking pumpkin season off in August in this household this year because of all the pumpkin deliciousness that’s been occurring here lately.

Last quick note: this pudding is sort of a delicious mess, and is to be eaten in a bowl. With extra sauce on top, of course! And an extra drizzle of molasses wouldn’t hurt ;) 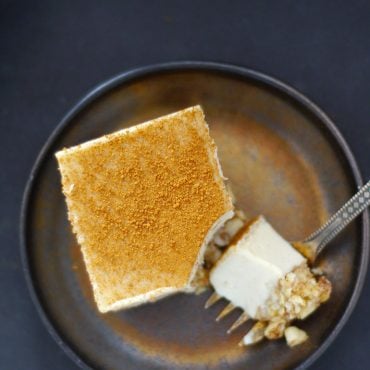 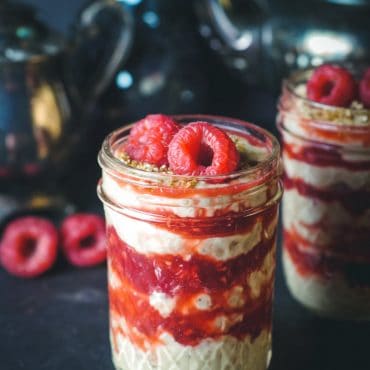