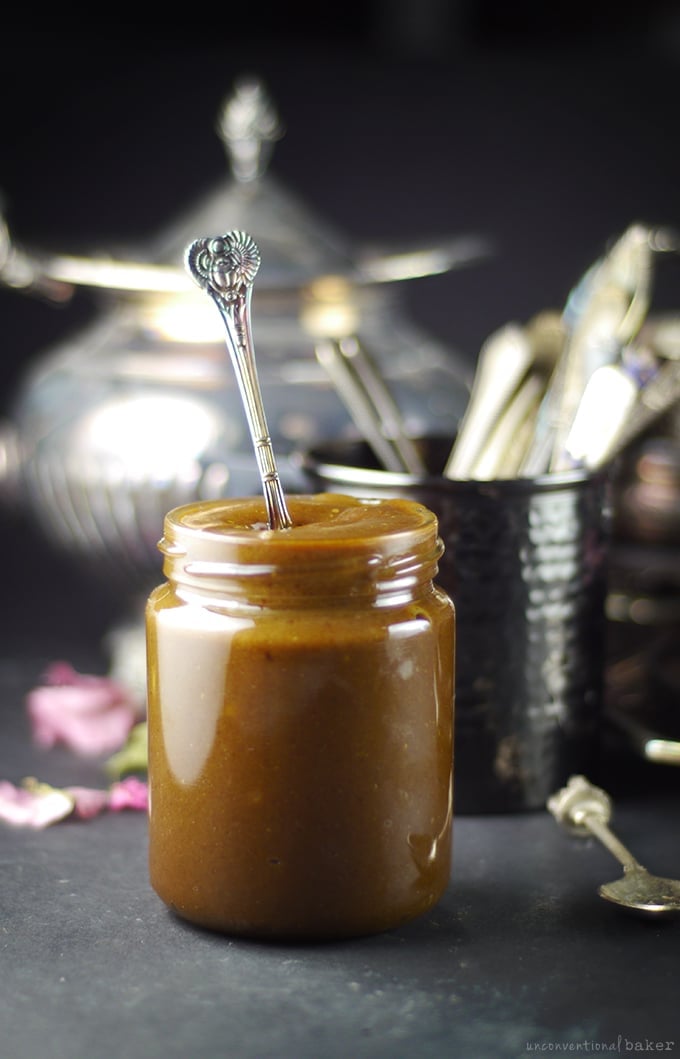 Hola, bom dia, ...and howdy :) I wanted to share another pantry staple in many cuisines around the world and a personal childhood favorite -- dulce de leche. Except, my version is, per usual, a little unconventional (but hey, what did you expect?! ;) )... 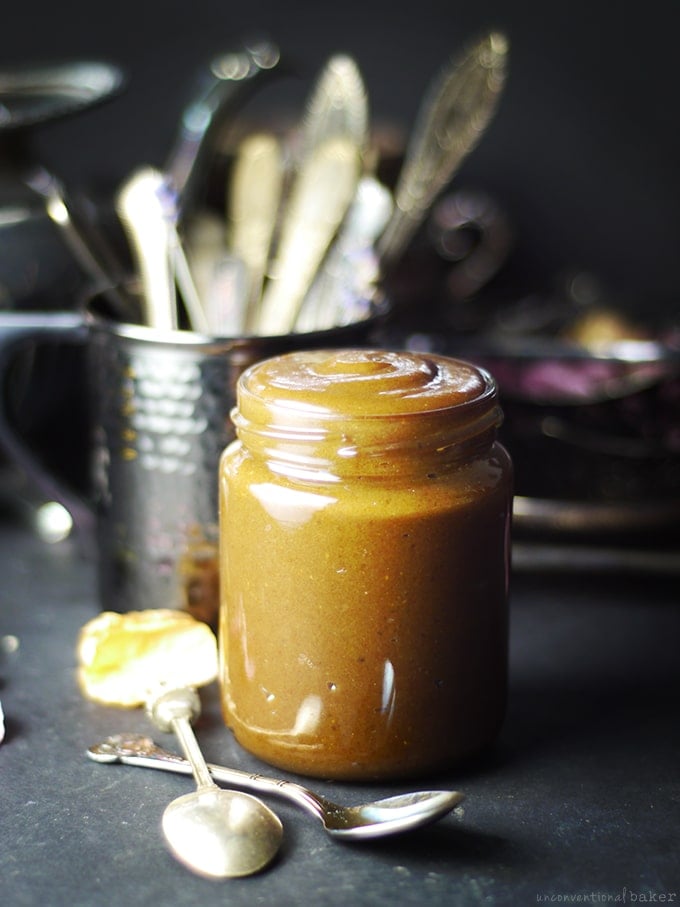 If you've seen my condensed milk recipe from the other day, you'll know that dulce de leche is one of the few "homemade desserts" I grew up with -- mom's specialty (aka put a can of condensed milk in hot water and let it cook up until it turns into caramel)(aka baking & dessert-making were not her forte...)(aka still always loved her dulce de leche!). 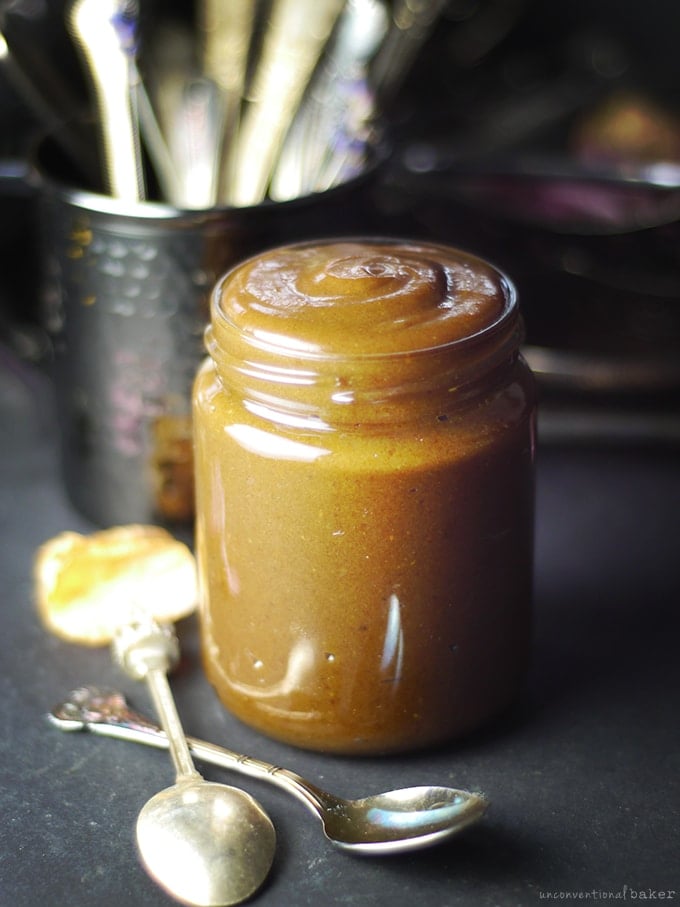 To this day, it's something I absolutely adore. And it's one of those things I always crave when I walk by the ice cream or jam section at the store. I don't know why I sometimes even pick up the jar and look at the ingredients, as though expecting to find something in there other than milk and sugar... (can't tell you how many times I've done that! It feels like there's really no room for disappointment... but it's still always a tad sad returning that jar to the shelf...). 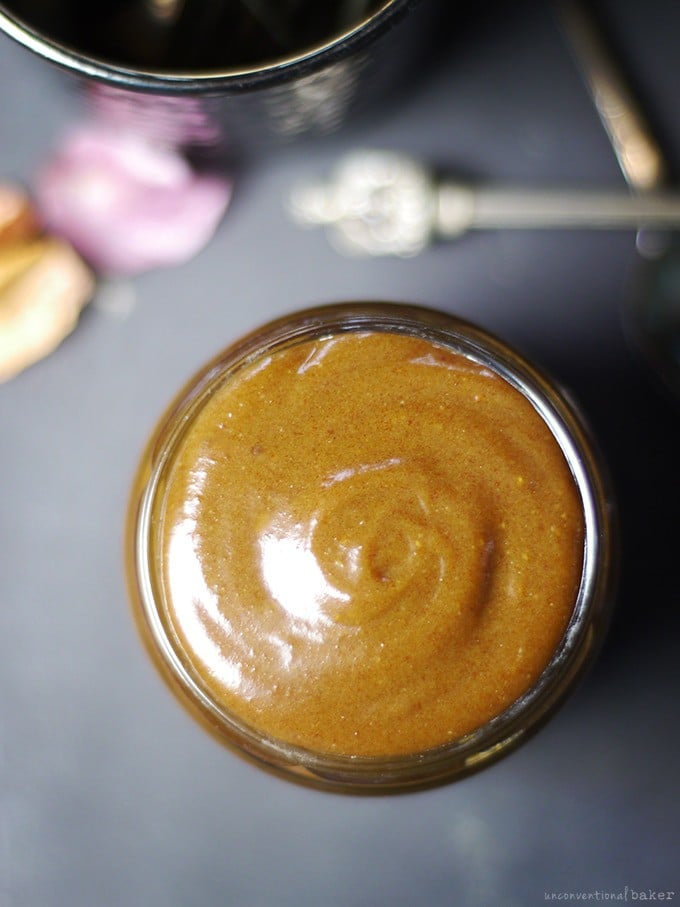 I used to make my own from coconut milk & sucanat, but lately I just haven't been feeling like stirring a pot... So it's been a long time since this sweet caramely concoction and I had a date. Recently I've been inspired to make a few desserts involving it, and wanted to figure out a better and quicker way to make it: enter this raw, dairy-free & refined sugar-free dulce de leche. BIG WIN. The word addictive doesn't even cut it! 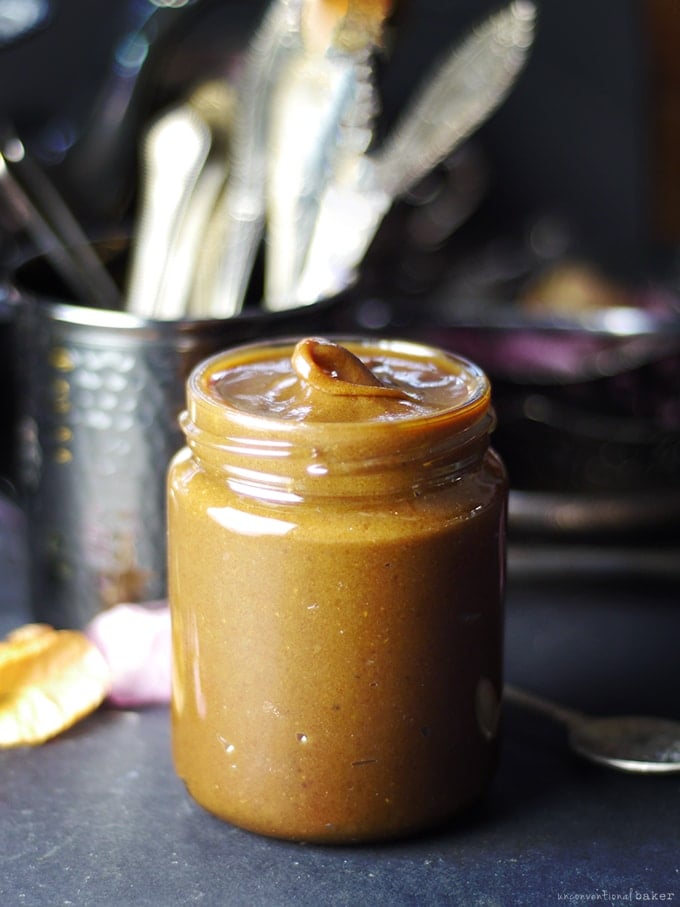 Maybe irresistible describes it best... What's better than creamy, spreadable, soft, and gooey caramel...? Just a few simple ingredients and a blender, and you'll have yourself a jiffy, spiffy caramel spread in no time. And I love this version about a billion times better than my older recipe. 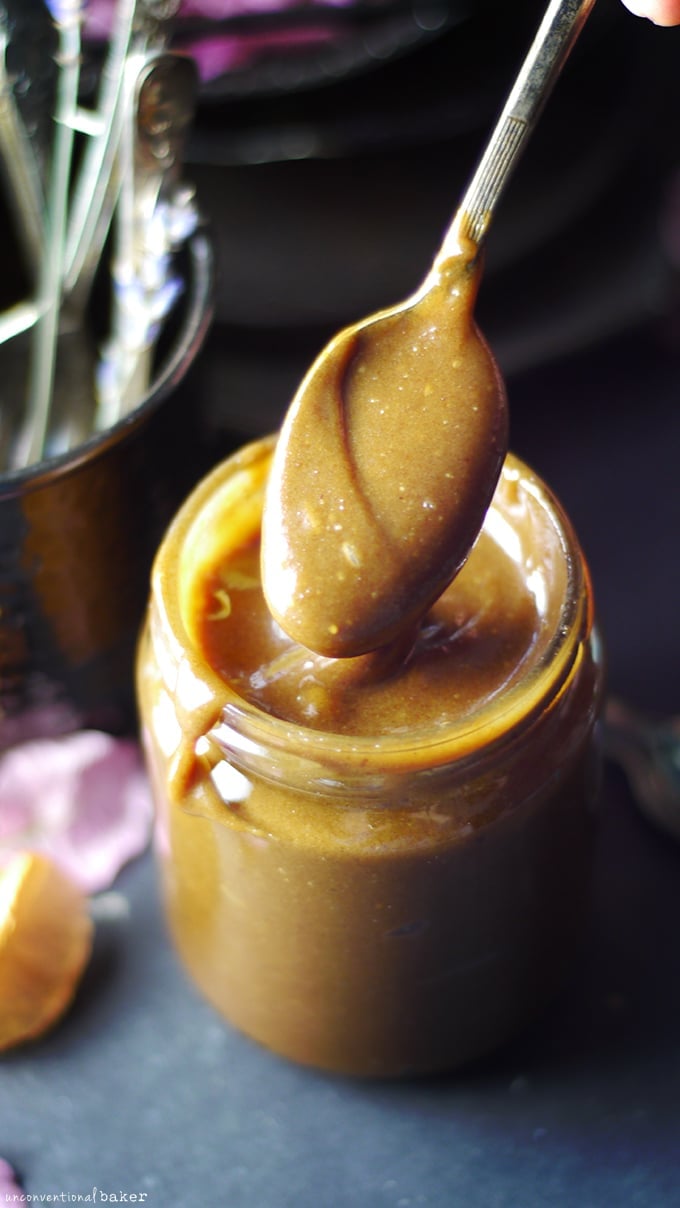 Don't know what to do with dulce de leche? (Really?) How about eat it with a spoon (bad idea -- hide all spoons. It's dangerous!). Spreading it on toast might be a better way to go (portion control... ;) ). Drizzle it over your nice cream (the best!). Add it to your coffee and smoothies. Make a billion and one desserts with it (coming soon...). Or maybe eat it with a spoon... it's not a bad option after all -- I grew up doing it and I'm doing just fine, ya know ;) . Warning though -- this stuff is super sweet! 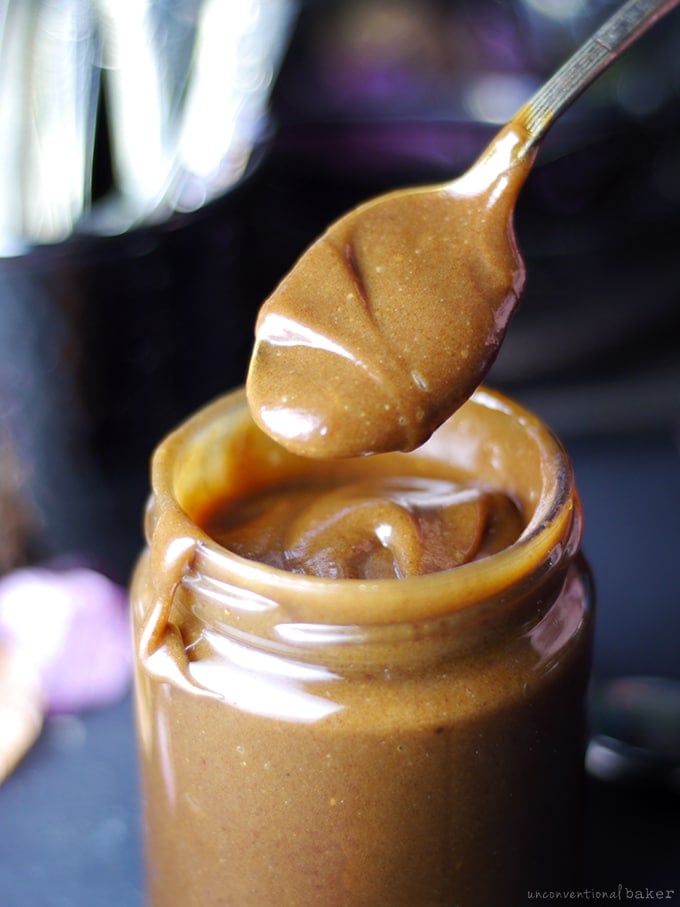 But seriously, stock up on the ingredients, and maybe even get a head start on it because... then you'll be able to make things like this with it...

Did I convince you? I'll try to share the recipe for these alfajores soon, but no harm in making a few trial run batches in the meantime, right?... You know, just to get familiar with the recipe... ;) UPDATE: alfajores recipe can be found here. 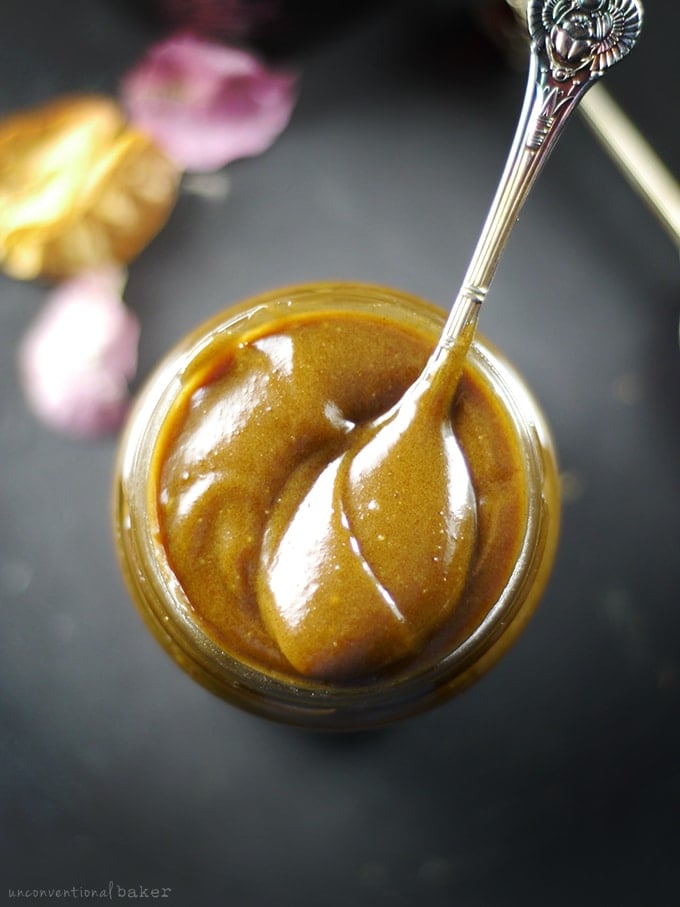 One thing to know about this recipe is that it keeps "condensing" / "cooking" itself... Yep, that's what I said. Weird, huh? What I mean by that is that it alters (ages?) for the better. When you first make it, it's very creamy and lighter-colored.  As it sits and settles it begins to slightly change and darken into a somehow smoother and more condensed-looking and tasting dulce de leche. The photo above is from when I first made it. The photo of the alfajores is from day three -- see how it darkened and thickened? It's the perfect consistency at that point for fillings. So the lesson is -- this is a good sauce to make in advance for recipes like that because it only gets better as it "ages"... Store at room temp by the way. And if you want it to be a bit firmer, refrigerate.

Store at room temperature for a few days, or in the fridge for several weeks. If storing in the fridge the mixture will solidify a bit and will need to be re-warmed / brought back to room temp before use. 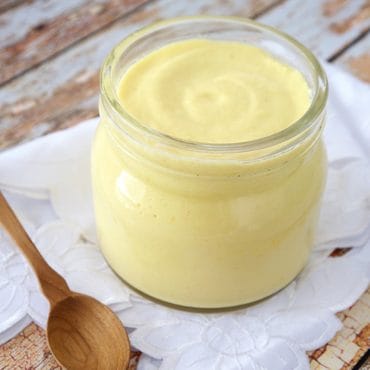 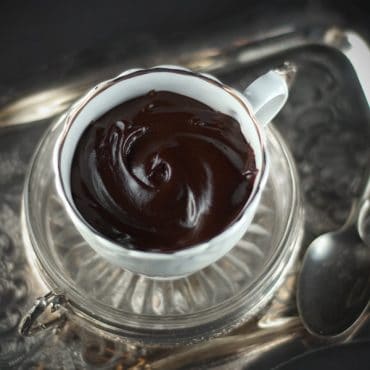